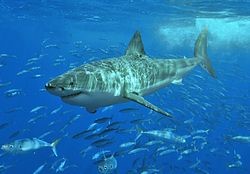 May 26, 2015 (San Diego) – More than a dozen young great white sharks have been spotted recently off the Southern California coast, mostly off Huntington Beach.  But this week, a six-foot-shark that lifeguards indicate could be a great white was seen off the shore in Oceanside.

Unlike in the Jaws movie, where the sight of a shark fin sent beachgoers screaming to shore, the Oceanside shark sighting didn’t seem to phase hundreds of surfers and swimmers from venturing into the water, KNSD reports.

The sharks are likely seeking fish and other food sources in deep waters, experts have said, and thus far have shown no interest in people closer to shore.

I would be on land until further notice. Those surfers and swimmers are very brave... Hopefully there is enough food out there in the deep waters now to keep them away from the shores.

Anyone who dive into deep water dressed in shiny black dive suits resembling a seal (shark's favorite prey) is beyond me!

Didn't faze them? I'm shaking in my boots from miles away. Sharks? No, thank you :)