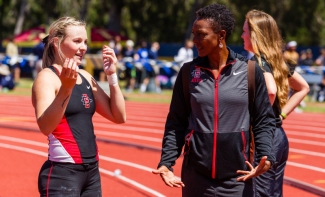 “As a San Diego State alum and native, I am very excited for the opportunity to coach at my alma mater,” Lusitana said. “The first time I met Shelia (Burrell), I could tell immediately that she is dedicated, passionate and knowledgeable. With Shelia leading the program, in addition to my experience as a former member of SDSU’s track team and training with SDSU alum and Hall of Fame coach Bob Larsen, I am looking forward to the challenge ahead.”

Most recently, Lusitana was an assistant cross country and track coach at Canyon Crest Academy in San Diego, Calif., beginning in 2013. The Ravens placed third or better each of Lusitana’s four seasons on the staff, advancing to the CIF state championship meet each of the last six years. In 2016, Canyon Crest placed second in the CIF San Diego Section Division II championship, led by race-winner Kira Loren. The Ravens placed ninth at the state cross country championships.

Lusitana’s other coaching stop was a two-year tenure on the cross country and track staff at Torrey Pines High School in La Jolla, Calif. He was an assistant coach for the 1985-86 school year before he was elevated to head coach for the 1986-87 season. Lusitana left coaching in 1988 to run his business, Redsand Inc., an action sports clothing company. Lusitana and his partners sold the company to Perry Ellis in 2003 and he then became a manager and partner of Amigo Custom Screen Prints in Carlsbad, Calif.

“I'm very glad that Shelia Burrell has added Robert Lusitana to her staff at SDSU, my alma mater,” Larsen said. “I am confident that Robert will do a great job coaching the distance runners.”

A San Diego native, Lusitana ran on UCLA’s cross country team in 1979, which was the first Bruin team to advance to the NCAA Cross Country Championships. He also competed in track for one year at San Diego State, graduating with a Bachelor’s of Science in accounting in 1982. He trained with the Jamul Toads Running Club from 1977-85.

“We’re happy to have him,” Burrell said. “He’s a great guy who has done some interesting things in his life. I think he will be a good fit for San Diego State.”