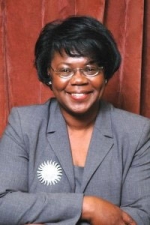 “When we have high poverty, it affects everyone because it increases taxes. People require more social services. Had the County been more effective at meeting basic needs for food, healthcare, and shelter, parents could get out and look for work and get off social services.” Instead, Jackson says, the County has given families a hard time to obtain basic services, with waits up to one year just to get an appointment.
If elected, other priorities for Jackson include getting a county fire department, securing small regional powerplants, and finding an alternative to Sunrise Powerlink, which she opposes. Jackson also calls for mass transit development along the I-15 corridor south to the City Heights area, where many immigrants and refugees urgently need transportation. “Mr. Roberts seems to have supported mass transit development down to Miramar, but the County doesn’t stop at Miramar,” Jackson chided. “Mass transit is also good for our environment by getting these cars off the street.”
She believes her experience makes her the best qualified candidate for the job.
“When we look at people running, I am the only one with a proven track record of helping all people as an elected official,” Jackson notes. “Voters need someone who has been a strong voice for parents consistently.”
As a school board member and now president, Jackson says she has “led the charge” for more programs to help families, such as bringing in Americorp workers on school campuses to help speed up claims and get help for those in need. She supported Proposition S, a bond that provides funds to revitalize school buildings. “I break barriers. I bring others along with me. I have experience. I’ve helped get others elected, and I am a consensus builder,” Jackson adds. “I win because I speak for people.”
She also shattered the glass ceiling while in the Navy, where she served 21 years and was one of the first women to go through advanced medical training as a Navy corpsman, becoming the senior female on her ship and among the first to get her own medical platform.
Born in North Carolina, Jackson moved to San Diego after completing her Naval career. She obtained a teaching degree from California State University San Marcos and a masters in education leadership from National University. She taught at public elementary schools before running and winning a seat on the San Diego Unified School Board in 2004, also serving on the National School Boards Association.
Jackson is endorsed by fellow San Diego Unified school board members Richard Barrera and John Evans, as well as by Supervisor Leon Williams, who represented the Fourth District for 12 years. Other backers include John Johnson, former executive director of the Urban League, Rev. Timothy Winters of Bayview Baptist Church, Rev. Reginald Gary of New Creation Church, and Peter Zschiesche, San Diegio Community College Board.
“I’d like the readers to know that they need a public servant, not a politician,” she concludes. “I have a proven track record. Especially in this economic crisis, I will get there and work hard for all families.”
For more information on Jackson’s candidacy, visit www.SheliaJackson2010.com.