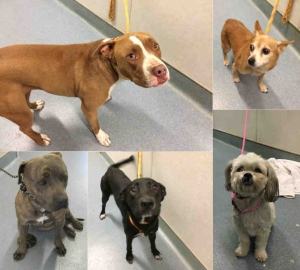 July 8, 2017 (San Diego's East County) - This year’s Fourth of July fireworks are over, and County’s animal shelters are again seeing a sudden spike in the number of dogs arriving after the displays.

Dogs often bolt at the first sound of fireworks booms and in their panic escape yards or otherwise run off. Between 7 p.m. on July 4 and noon of July 5, 45 dogs were brought into the County’s three shelters. In past years, County Animal Services has seen the surge continue over a couple days as additional dogs are picked up or brought in by residents who find them.

The department microchipped dogs for free in the days leading up to the Fourth of July holiday. Dogs that took off during the fireworks could then be quickly identified and reunited with their owners. More than 1,000 dogs received the chips.

“If someone is missing their dog, they can check our website or visit our shelters to see if we have their runaway pets,” said County Animal Services Director Daniel DeSousa. “We encourage people to look at surrounding shelters too as dogs can easily run from one shelter’s jurisdiction into another.”

Animal Control Officers worked all night on the Fourth of July to rescue lost dogs. July 5 is typically the busiest day of the year for animal shelters as they cope with the influx of new animals.

Owners can check the County shelter’s lost and found page to see if their dog has turned up at any of their three locations. Photos are posted as soon as the animals are kenneled.

You can also register your lost dog with Finding Rover, a free facial recognition app used by the public and County Animal Services. All you have to do is upload a photo of your lost dog and it will search its database as well as those of the three County shelters to see if any of the faces of lost or found dogs match that of your dog. One owner found his dog on the Finding Rover app after the dog had come in to the County shelter in Bonita overnight.

Finally, post “lost dog” signs in the neighborhood. A resident may be holding the dog to see if anyone puts up fliers.

If you’ve come across a lost dog, try to lure the animal into a safe area with a treat. Then once it’s secure, contact Animal Services at (619) 767-2675 so an officer can pick up the dog. If you live in another jurisdiction, you’ll be referred to a phone number who does handle your area.

A lost dog that doesn’t have identification and isn’t claimed by an owner within three business days will become available for adoption. If he does have ID, Animal Services will contact the owners. If an identified pet (microchip, license, ID tag) isn’t picked up within five business days, then he’ll become available for adoption the following day.

If you’d like to microchip your dog, County Animal Services offers microchipping from 1 to 3 p.m. every Thursday at all three of its locations. The chips cost $10 each and include national registration.