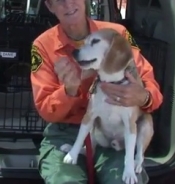 November 17, 2011 (Poway) – A quick-thinking emergency room nurse at Pomerado Medical Center in Poway helped reunite a Caltrans worker with his arm, which was severed in a freak accident at 1:45 p.m.  The nurse suggested calling the San Diego Sheriff’s Search and Rescue team to find the missing arm.

“There is a three-hour window to reattach the arm,” Melissa Aquino, public affairs officer with the Sheriff, said. Fortunately, a recovery team of 25 volunteers and two search dogs located the missing limb at 3 p.m. The victim is now undergoing surgery to be fully “armed” in time for Thanksgiving.

The contractor was standing next to brush-clearing equipment on Highway 76 west of I-15 on Gird Road in the Bonsall area when a loose cable got caught in the machinery. The cable snapped the worker’s arm and launched his arm into the air.

The arm was found 50 yards away from the machinery. It was placed in ice and saline, then flown by the Sheriff’s ASTREA helicopter to Palomar Medical Center.

In addition to the Sheriff’s search and rescue volunteers, Escondido Police Department was also en route with two dogs when the arm was located.

Cal-OSHA is investigating the accident.