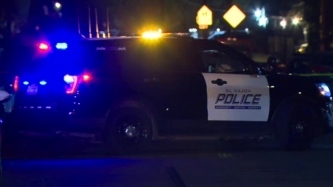 At 10:15 p.m., detectives from the Regional Auto Theft Task Force requested help from uniformed Sheriff’s deputies to conduct a stop on a van pulling a stolen trailer. Deputies from the Lakeside substation conducted the high-risk stop in the 1100 block of Decker Street in the city of El Cajon.

“The driver, identified as 31 year-old Erik Talavera, exited the van armed with a knife,” says Lt. Randy Soulard with the El Cajon Police Department. “The deputies gave verbal commands to Talavera, who failed to comply with those commands. During the confrontation, both deputies discharged their firearms, striking Talavera.”

Lt. Soulard says deputies immediately performed life-saving treatment on Talavera until they were relieved by paramedics. He was transported to a hospital, where he underwent surgery for gunshot wounds and is now in stable condition, under guard at the hospital for charges stemming from the incident.

The National City Police detective was also treated at a local hospital for a gunshot wound that is considered minor and non-life threatening.

El Cajon Police are investigating the incident, since it occurred in their jurisdiction. Lt. Soulard confirmed in an email to ECM that no ECPD officers were involved in the shooting.

of people not doing what they are told.