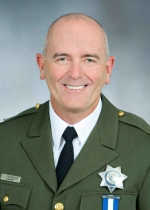 August 10, 2010 (San Diego) -- Sheriff Bill Gore announces the promotion of Commander Ed Prendergast to Assistant Sheriff, Law Enforcement Services. Assistant Sheriff Prendergast is currently assigned oversight for the Alpine, Imperial Beach, Lemon Grove, and Santee Stations, as well as Rural Law Enforcement and Crime Analysis.He is a 29-year veteran with the Sheriff's Department who has served with distinction in every assignment throughout the organization, said Gore.

“Ed has always excelled in his assignments,” commented Sheriff Gore. “Whether it has involved implementation of multi-faceted programs, such as “Graffiti Tracker” and “Tip the Scale,” or oversight of the Border Crimes Initiative and the Vista Command, Ed has always had the acumen and experience to get the job done.”

A formal promotion ceremony will be held in the future.

He discovered that his problem with detective shows of the era was that there was and was an early advocate for using the medium as a tool for education; and tale and this year's best sports drink-zombie-showdown-gore fest... food safety supervisor