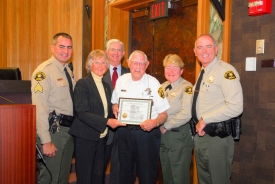 December 8, 2010 (Lemon Grove) -- They make a difference everyday and they do it for free. Volunteers play a vital role in building a community. On December 7th, Sheriff Bill Gore and the County of San Diego honored Lemon Grove Senior Volunteer Patrol member Dale Kephart, 93, with a “Volunteer of the Month” award.

“International Volunteer Day was on Sunday (December 5th) and Mr. Kephart is a shining example of the spirit of giving in the community,” said Melissa Aquino with the Sheriff’s office.

Kephart has been with the Sheriff’s Lemon Grove station for 17 years now. He has logged nearly 15,000 hours of volunteer time patrolling Lemon Grove, Casa De Oro and Spring Valley. In addition, he provides traffic assistance during special events and does welfare checks on seniors enrolled in the Sheriff’s “You Are Not Alone” (YANA) program. After retiring from the El Cajon Valley School District in 1993, Kepharte refused to be a couch potato, so he joined the Sheriff’s Volunteer Patrol.