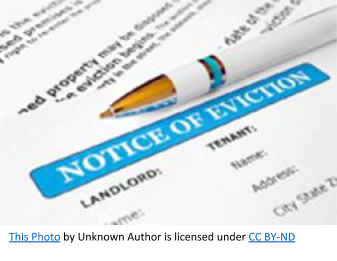 Earlier this week, the Sheriff began issuing eviction notices to around 160 tenant for evictions already in progress before the COVID-19 shut-down orders. But after reportedly receiving political pressure from the Governor’s office and at least one Supervisor, the Sheriff reversed course.

“We have heard from several elected officials,” a statement from Gore today states. “Although they agree serving these evictions are perfectly legal, they expressed concerns about the impact.” He added that the Sheriff’s Department “has decided to suspend eviction service pending further discussion.”

In a letter to the Sheriff, Supervisor Nathan Fletcher urged postponement until courts reopen, which is expected on May 26.  Now is not the time to place vulnerable people at a higher risk of losing their homes,” Fletcher wrote, adding, “The court closure has presented a challenge for tenants who will need to protest their eviction lockout.”

The Sheriff’s department, in an earlier statement, had indicated that Governor Gavin Newsom’s executive order and a county moratorium on evictions were meant to protect residents dealing with economic hardships caused by COVID-19, but not those facing eviction before the pandemic impacted our region. “We also have a responsibility to the landlords that depend on income for their livelihoods.”

Estela De Los Rios with CSA San Diego Fair Housing, an El Cajon-based organization that assists residents with housing issues, posted on Facebook that after learning that the Sheriff was resuming evictions “before the May 31 end date that Governor Newsom put in pace, I immediately called the Governor’s office and reached out to different government offices, including our Attorney General, Xavier Becerra’s office.” She also reached out to Rev. Shane Harris, who immediately called the Governor. 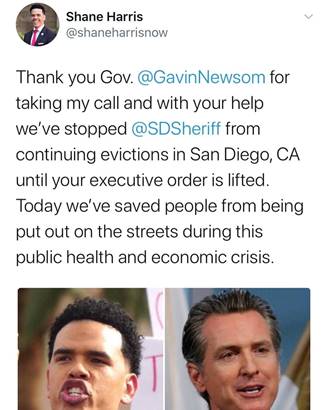 “Within an hour, the Governor halted the evictions!!” she continued. “In fact, there were 25 more that would have been served today. Thank you Rev. Shane Harris for all your efforts and continued collaboration with CSA San Diego County Fair Housing. WE DID IT!!”

“Supervisor Nathan Fletcher just royally screwed property owners,” Michael Schwartz of Santee posted on Facebook.  “So if you own a house or investment property, especially if you rent it to someone, don’t vote for Fletcher ever again.”

He questioned the fairness of selectively enforcing some laws, but not others including a public health order keeping businesses closed and employees out of work.

“How about not enforcing the keep-businesses-shut-down law?” Schwartz asked. “Hell, that might even solve the eviction problems.”

Local and state actions to protect renters are part of a national movement that has included rent strikes in some cities as a growing number of tenants are suffering severe economic impacts from lay-offs, furloughs, and business closures.

ECM has learned that there is also a movement among some local activists and politicians to ask the Governor to mandate a moratorium on lenders foreclosing on homeowners and business property owners unable to meet their payments.

While some lenders are allowing mortgage holders to defer payments until the end of the loan period, others are requiring balloon payments that would be due in a matter of months. A local activist in Julian told ECM that her lender has indicated it would require a balloon payment unless the Governor prohibits such action.

The activist says she has spoken with several local political leaders who plan to ask the Governor to issue an executive order prohibiting foreclosure on mortgage holders during the pandemic, also requiring that missed payments be made up at the end of the loan period, without any balloon payments.

Capitalists supposedly take risk in order to make a profit. We should indeed worry about landlords who have leveraged themselves into a difficult position, but this is the risk you signed up for, people. Not your renters. I'd like to see mortgage relief and political pressure on banks to provide help for mortgage holders as well, but this is going to have to come out of Washington and the willingness Federal Reserve to expand the money supply further. Currently, the appetite for more federal support to the American people is on hold while the senate works on unrelated issues like confirming unqualified judges. Maybe they will wake up and get going soon?