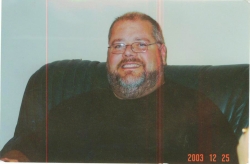 March 28, 2010 (Ramona) – Sheriff’s Search and Rescue personnel have been activated for a large-scale search of the Lake Sutherland area in Ramona after discovery yesterday of a vehicle belonging to Wiilliam Kelly Buntain, 48. The Ramona man, an insulin-dependent diabetic, left home March 22 without his medications and has not been seen or heard from since then.

His wife, Khadija Buntain, reported him missing on the morning of March 23rd. Buntain reportedly told left around 1 p.m. Monday the 22nd and said he was going to get some bottled water. A Sheriff’s spokesman told East County Magazine that Buntain was depressed over the recent death of a family member. After searchers began questioning people at the lake, one individual indicated he had seen Buntain in the vicinity.

He takes several medications but left home without any of his medicines and with no personal belongings. Yesterday afternoon, his car was found by turkey hunters  near the southeastern portion of Lake Sutherland near Ramona. Buntain is described as a white male, about 5 feet 11 inches tall, weighing about 300 pounds. He has thinning gray hair, a full beard and wears eyeglasses. It is believed that he was wearing a blue T-shirt and green camouflage pants when last seen.

If you have information on this missing person, please call the Ramona Sheriff’s substation at 760-789-9157.