April 24, 2018 (Rancho San Diego) -- Investigators from the Rancho San Diego Sheriff’s Station want your help locating a man wanted in connection with theft, burglary, and fraud in the East County.

On April 1st between 12:00 p.m. and 1:45 p.m., someone stole a checkbook from the glove box of a vehicle that was parked in the 2100 block of Merlyn Place in unincorporated El Cajon. 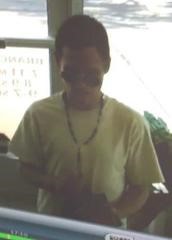 At about 2:00 p.m., the suspect, using someone else’s identification card, attempted to cash one of the stolen checks at the Money Tree located at 303 North 2nd Street in the City of El Cajon. Money Tree contacted the victim, who confirmed the check was fraudulent.  Money Tree refused to cash the check and the suspect left in a Burgundy, four-door, Toyota Avalon.

The suspect, seen in these surveillance photos, is described as a White man between 25 to 35-years-old with short, brown hair. He stands about 5’7” tall and weighs approximately 165 pounds. The suspect was last seen wearing sunglasses, a white shirt, black shorts and white shoes.

Information on how to send anonymous emails and mobile app tips can be found on our website www.sdcrimestoppers.org.

Thieves are keeping a close watch on people .As soon as they get a chance they rob the belongings of them. So people must stay more alert.Luckily , this man doesn't get a chance to cash the check which he had stolen from the car.Everyone in the locality should try hard to get this man caught.Else he will repeat the same crime with someone Else's check.Every person who commits crime must remember that you cannot escape from the law always.You would be definitely caught some or other day.
You can run, but you will be caught.