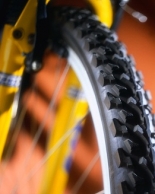 The cyclist was transported to Palomar Medical Center .  If you observed this collision, call Traffic Deputy A. Meleen at (858)513-2820.