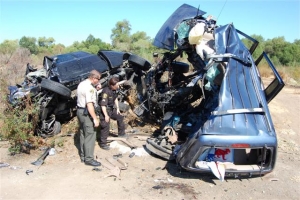 “If you choose to drink and choose no 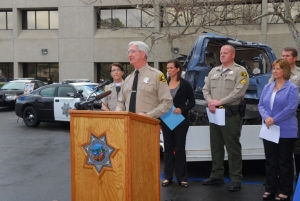 t to have a designated driver, you’re gonna be an automatic loser and you stand a chance of losing your license, your car, your freedom and even your life,” Sheriff Gore said. “More tragically you could take the live of an innocent victim. That’s what happened to the innocent victim that was driving this car [SUV] that’s pictured here behind us,” he said, referring to Marabeas’ vehicle.

Gore also issued a reminder to parents county-wide about social host ordinances. “If you decide to host a Super Bowl party for your underage kids,” he noted, “you’ll be held responsible should something happen to them if they get involved in some type of accident while drinking and driving…So let’s make the right choice…not just this weekend but every weekend, and not drink and drive.”

Special roving DUI patrols will be deployed in more than 20 communities throughout the area looking to stop and arrest drivers who are impaired. These DUI patrols are in addition to regularly scheduled patrol officers, all looking for the tale-tell signs of an intoxicated driver behind the wheel. Funding for the Avoid DUI Task Force is from the California Office of Traffic Safety.