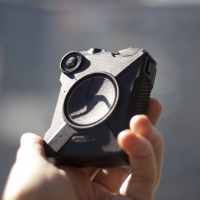 July 19, 2017 (San Diego) — The San Diego County Board of Supervisors this week unanimously approved more than a million dollars to equip Sheriff's Deputies with body-worn cameras.

The Sheriff's Department will officially roll out its body-worn camera program next month at the Alpine Sheriff's Station and Ramona Sheriff's Substation. From there, deputies countywide will receive the cameras within four to five months.

During that time, deputies will be trained on how to use the body-worn cameras, as well as preparing and fine tuning the infrastructure to support the technology.

Body cameras have had dramatic results in some other jurisdictions. Notably, the San Diego Police Department reported a 43% drop in officer misconduct allegations and a 16 percent drop in serious use of force such as tasers. In addition, the number of allegations made against police officers later found to be false also increased, so use of the cameras appears to provide better protection for both the public and officers.

In Britain, a study by Cambridge University found that complaints against police officers dropped 93% when body cameras were worn.

Sheriff Bill Gore says the body-worn cameras by Sheriff’s deputies will help provide another perspective during use of force investigations.

"Hopefully now with body-worn cameras, we'll see what started the force,” he says.” Was it appropriate force? Was it too much force? It'll tell the story."

The Sheriff's Department has been working on implementing body-worn cameras in its law enforcement operations for several years.

In August 2014, a Sheriff's Body-Worn Camera Committee was formed and met with law enforcement agencies from across the United States, including several here in San Diego County, to get feedback on their experiences with the technology. The Citizens Law Enforcement Review Board was also consulted, plus the department met with members of the public to get their input on proposed policies and procedures.

In February of last year, the Sheriff's Department unveiled a 90-day pilot program at select stations and facilities to try out body worn cameras from three different companies, gaining valuable data and experience for the Sheriff’s body camera program.