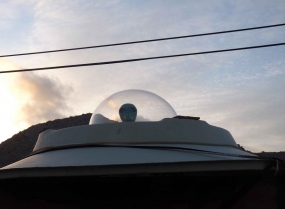 The same phenomenon may also explain the mysterious loss of power at the Campo wind farm in December 2010, when turbines lost power for three months following an as-yet-unexplained electrical flash.

“I’ve seen a lot of aliens in my day, but this beats ‘em all,” Agent Frank Lee True told ECM in an exclusive interview this morning.

According to Agent True, last night after his shift ended, he was driving east on I-8 when he first spotted some suspicious activity near the wind farm in Campo.

“I heard a hum, then saw a silver flying object materialize out of the clouds,” he recalled.  It was moving really fast. Then it turned on end, doing wheelies and loop-de-loops around the turbine blades, kind of like those extreme sports.  There was an unearthly sound emanating from the craft, echoing all around; it sounded like “Wheeeeeeeee!”

As suddenly as it appeared, the strange object vanished , leaving only a puff of 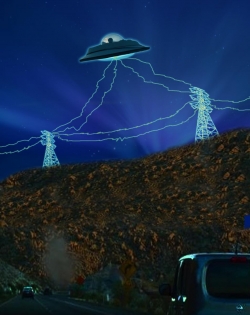 vapor, he said.  According to Agent True, he continued traveling east toward Jacumba, where the unidentified vehicle reappeared over a rocky outcropping.

“It was hovering right above the Southwest Powerlink,” he told ECM.  “Close enough that I could see the pilot; he looked a lot like E.T.  Then the  bottom slid open and there was a huge blue flash, radiating down.  All of a sudden, the electricity started flowing backwards through the power lines and got sucked up--straight into the mothership.”

A  blackout occurred late last night in rural East County during the time that Agent True claims to have witnessed the power theft, ECM has confirmed.

The evidence raises compelling questions.  Has East County—and possibly Yuma—been invaded by a very foreign interest bent on purloining power?  Or has SDG&E extended its power exporting agreements to include a galaxy far, far away?