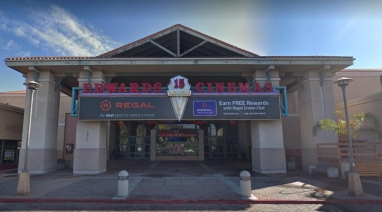 By Miriam Raftery
July 3, 2019 (Rancho San Diego) – Last night around midnight, three boys ran into the Regal Edwards Cinema in Rancho San Diego to report a shooter outside, NBC 7 reports.
Several people in the theater called 911 and Sheriff’s deputies responded.  The boys told Sheriff’s officials that a man had pulled out a handgun and fired shots in the air after an argument with the boys.  The shooter was reportedly a passenger in a four-door, silver or gray car.
Bullet casings were found in the lot. Deputies searched the theater and shopping center surrounding it but did not find the shooter, or any victims.
The Sheriff’s department asks anyone with information on the gunfire incident to call (858) 565-5200.

The continuing evolution / degradation of society. Settle an argument with a gun? Wow!