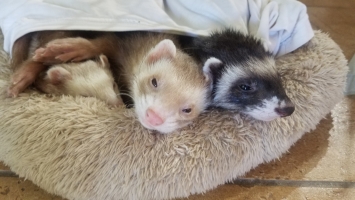 Who knew that La Mesa was a hotbed of underground ferret activity?

Now, furtive ferret owners may have found a champion in Councilwoman Kristine Alessio, who raises Bengal cats, has served as Legislative Director for The International Cat Association and as a volunteer for the City's Pet Therapy Program.

Ferret ownership is already legal in 48 states, but not California or Hawaii.  Advocates of ending ferret prohibition in California believe a sanctuary city designation in La Mesa would be a symbolic victory that could help

On June 8, Pat Wright of LegalizeFerrets.org in La Mesa sent a letter to all Council members to declare La Mesa a sanctuary city for ferrets in hopes of helping to change what Wright views as an “unjust” state law.  The group held a meeting July 15 attended by Council members Bill Baber, also a pet owner, and Alessio, to introduce them to the joys of frolicking ferrets.

“City Councilwoman Kristine Alessio delighted us at yesterday's party promising to help legalize ferrets,” reads the latest post on the Legalize Ferrets Facebook page. “She has been discussing the issue with Assemblymen Todd Gloria and Randy Voepel, hoping to convince either or both to introduce ferret legalization legislation, but without much luck. Even though ferret legalization seems like a no-brainer, it just isn't seen as a serious issue. But the effort to make La Mesa a Ferret Sanctuary City builds steam. “

Alesso told KPBS that she agrees ferrets are domesticated and make good pets, playing with toys and using a litter box.  She observed with a chuckle,”We have a whole ferret-loving community that I was unaware of…that’s what you do when you’re elected. You represent the interests of your constituents.”

The California Fish and Game Commission has claimed ferrets are “wild animals” and voiced concerns that they could be released into the wild, competing with native wildlife.  Wright counters by saying that this has not occurred in other states where ferrets are allowed.

The Commission has refused two petitions, one asking that ferrets be removed from the list of banned pet species, and the other asking that permits be issued for neutered males, as was done prior to the 1985 ban on ferret ownership.

The key concern raised by state officials is that an environmental impact report would be needed at a cost of up to $600,000.  The concern that environmentalists could file a lawsuit against the state is another worry.

So for now, ferret owners in California are left in a “don’t ask, don’t tell” situation—a situation that Wright, the founder of Ferrets Anonymous, hopes to change—starting in  La Mesa.

An online petition has been started asking La Mesa to be a Sanctuary City for Ferrets. The link is at https://www.change.org/p/mayor-mark-arapostathis-asking-la-mesa-ca-to-be-a-sanctuary-city-for-ferrets?recruiter=2599838&utm_source=share_petition&utm_medium=copylink&utm_campaign=share_petition
It's not insensitive and petty to mock our fellow human beings by comparing them to ferrets. It's also not at all hateful to laugh and make fun of the plight of families who are being torn apart by leaders in this country. No, it is perfectly fine to behave in this manner because ignorance clearly rules the day.

The chuckles about a Sanctuary City I find insensitive given that we have fellow "Human Beings" being deported and there are cases where Parents and Children are being separated. Perhaps our City Leadership could find a synonym less potentially hurtful given we have struggling neighbors from the south here and our La Mesa City Leadership should consider showing they have hearts by not rubbing it in their faces over Ferrets. I'm sure it's all good fun and not meant as a contrast, I certainly hope so. But how do you, City Council, know it isn't something that is genuinely hurtful and serves to alienate not just our Hispanic Brothers and Sisters in the Community, but others that aren't Caucasian? Lastly, in what other context have we heard the term "Sanctuary City" in the last 6-8 months? I just don't care for this term being lightly bandied around and associated with La Mesa in this manner. It's a term of anguish not light heartedness.

I didn't know the proposal was for only one species of ferret.