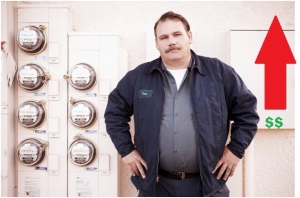 October 11, 2011 (El Cajon) – SDG&E wants to hike utility rates by over 17% in the next four years.  Tomorrow, East County residents will have a chance to voice their views on the proposal at two hearings held by the California Public Utilities Commission (CPUC). The public meetings will be held at 2 p.m. and at 7 p.m. at the El Cajon City Council Chambers, 200 East Main Street in El Cajon.

The rate hike is opposed by the CPUC’s own Division of Ratepayer Advocates (DRA), which conducted an audit that found SDG&E inflated its costs. The DRA recommended that SDG&E lower—not raise—its rates.

SDG&E claims it needs to raise rates starting in Jaunary 2012 in order to recover “reasonable” costs it will incur to distribute gas and electricity to ratepayers.

The DRA concluded, “SDG&E has asked ratepayers to overpay for service, including funding long-term stock options and incentive programs in excess of what is reasonable,” said Joe Como, DRA’s acting director. “DRA believes that the utility is capable of providing reliable service at a price tag far less than what SDG&E has proposed.”

Similarly, the Utility Consumers Action Network (UCAN) did an audit which found that in the past three years, “SDG&E’s rates have skyrocketed, its profits have soared, and its executives have reaped enormous bonuses even as its customers have suffered through the worst recession since 1929,” a UCAN press release states.

UCAN's team of experts pored through SDG&E's books and found that SDG&E should be lowering rates, not raising them.  UCAN was able to document $142 million in inflated costs.

"This case comes down to a question of fairness." says UCAN's Executive Director, Michael Shames, "In the middle  of the worst recession in many of our lifetimes, SDG&E’s rate request is lavish, extravagant, and unnecessary."

Some local residents have also complained that ratepayers should not have to foot the bill for increased costs to SDG&E resulting from the utility’s own errors, such as damage to equipment dropped by helicopters working on the Sunrise Powerlink.

Several East County ratepayers have also e-mailed ECM to complain that their rates skyrocketed after SDG&E installed smart meters at their homes in what one reader termed a “back-door rate increase.”

Late today, CPUC administrative law judge Yip Kikugawa  issued a decision on behalf of UCAN ordering SDG&E to allow consumers to opt-out of smart meters if they choose.  The utility must file a smart meter opt-out proposal with the CPUC by October 31.   View Document

“This is a step in the right direction and long overdue,” said La Mesa resident Susan Brinchman, who has contended that she has suffered serious health issues linked to installation of a smart meter at her home. SDG&E has claimed that the meters pose no health risks.

Brinchman urged the public to attend the CPUC meetings in El Cajon, adding,  “Let us prevail (loudly) upon the CPUC at their meetings this week.” She asked residents to urge that the opt-out process be completed quickly to aid those suffering health impacts.

A Proposed Decision on the SDG&E rate hikes is expected February 2012 and a Commission vote is expected around March 2012.

For more information, see DRA's detailed executive summary and full report of its analyses filed on September 1, 2011, on the docket card. DRA also published a press release on its recommendations

If you miss tomorrow’s meetings in El Cajon, an additional CPUC meeting will be held in  Oceanside on October 13 at the Civic Center Library, 330 N. Coast Highway , Oceanside 92054.

Last night's CPUC SDG&E rate hike hearing meeting in El Cajon was well-attended, the auditorium looked nearly full at one point. Citizens spoke for 1.5 hours, detailing a long litany of outrageous abuses by SDG&E, all of them (save one) against the proposed rate hikes that will be $1.5 billion, all told. The person FOR the rate hike was an executive director of an unnamed nonprofit who spoke hastily and left, leaving the rest of us to wonder if he had some incentive to support SDG&E.

Very alarmingly, citizens described increasing fire hazards (not decreasing) in the back country that will undoubtedly lead to more fires, to more losses of life and property as w/ the 2007 fires associated with SDG&E's arcing lines. They wept as they looked at the beautiful El Cajon valley mural in the City Council Chambers, envisioning the loss of natural beauty and family farms and ranches, as the Powerlink is brought across the mountains. Words they used to describe SDG&E: monopoly, greedy, arrogant, bully, lack of integrity, lying, unresponsive, causing deaths and property loss, harming people, forcing smart meters on people that emit pulsed microwave radiation that is making some people sick, driving them from their homes, and exposing everyone to significant health risks. Something obviously must be done beyond what has been attempted. We cannot allow a bully in the neighborhood that destroys our quality of life and that is exactly what we have in SDG&E. Perhaps it is time to hold regular meetings in East County, to form a coalition with all the citizens, groups, and organizations concerned about these issues that have a lot in common: public health, safety, and rights. Standing up to a bully is the right thing to do, in an organized fashion. We don't have to be treated like this. I am sure we can come up with some improved solutions.

The CPUC is not going to fix these problems, they have been complicit in allowing these to develop. CPUC Commissioners have shown themselves to have enormous conflicts of interest and preferences for utility interests. For instance, the head CPUC Commissioner, Michael Peevey, is a former Southern California Edison Vice President, accused of improper conduct, himself in a San Francisco Guardian article, "The Secret Life of Michael Peevey".

Organizations or citizens interested in forming a coalition to address all of the above, contact me at director@electrosmogprevention.org.