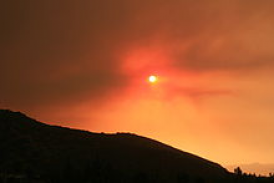 Companies say measures are needed to prevent bankruptcies, but Ramona group says the bills would increase risks of wildfires by axing incentives for utilities to improve safety

July 26, 2018 (Ramona) – Utilities are lobbying legislators to approve a pair of bills being pushed by Governor Jerry Brown in the wake of catastrophic fire storms  in Northern California linked to utility-owned lines and equipment.  Facing $10 billion in damages with reportedly only about $800,000 in insurance, PG&E has argued it could be pushed into bankruptcy without relief.  The utilities want to change California’s inverse condemnation laws, which hold utilities responsible for any fires caused by their lines. However, if a company is found to have safely operated its equipment, it can ask the California Public Utilities Commission to approve charging ratepayers for uninsured losses.

San Diego Gas & Electric (SDG&E) tried that approach, but the CPUC refused to approve charging ratepayers for the company’s liabilities in the 2007 firestorms, finding that SDG&E did not follow all required safety procedures. Now the big utility companies want to eliminate inverse condemnation in relation to wildfires--a proposal that has backcountry residents sounding the alarm.

The changes would not apply to wildfires earlier than 2018. Under Brown’s plan, courts would have to determine if a utility acted reasonably and balance the harm caused by wildfires involving powerlines against the public benefit of electric infrastructure.

Dianne Conklin, spokesperson for the Mussey Grade Road Alliance, a group of Ramona residents impacted by the 2003 and 2007 firestorms who have intervened in numerous wildfire-related proceedings, has sent a blistering letter on behalf of the organization to Governor Jerry Brown, Senate President Toni Atkins and Assembly Speaker Anthony Rendon  warning that provisions of amended Senate Bills 1088 and 901 “could gravely and substantially increase, rather than decrease, risk of castrophic wildfires in California by eliminating the utilities’ financial stake in safe planning, construction, maintenance and operation of their systems.  We urge you not to give a free pass to utilities and to not place additional burdens on fire victims, who want to be made whole,” she added.

Her letter warns that the proposed changes would also shift the burden of care for inspections from utility linemen to the CPUC.   “The CPUC does not have and in fact could never have sufficient resources to inspect over 200,000 miles of power lines and millions of components,” she points out, adding that CPUC-imposed fines against utilities have been insufficient incentives to boost safety.  By contrast, SDG&E did take major steps to improve safety after the 2007 firestorms –incentivized in part by being forced to have its shareholders, not ratepayers, absorb the uninsured losses for damages from two of the 2007 firestorms for which Cal Fire found SDG&E equipment responsible, along with a Cox Cable line in one of the blazes.  SDG&E has long disputed that finding.

The San Diego Union-Tribune reports that Rex Frazier, president of the Personal Insurance Federation of California, has also taken a stand against the legislation.  At a meeting this week by a legislative panel convened to consider the bills, he testified,  “Instead of pursuing some constitutionally suspect legislative change to a judicial interpretation, we argue the focus should be on safety improvements and vegetation management.”

Gfather is correct that California taxpayers will pay for these disasters, be it in a bailout package or heavy increases in insurance rates. The question is, what do we get from PG&E in exchange? Equity in the company is one answer. Remember when US taxpayers bailed out GM? The U.S. Treasury held shares in GM, later selling them at a profit. PG&E shares could be placed in our public pension funds. Instead of just getting hosed, make taxpayers an investor. Better, we can remember that the happiest utility customers in the state are in SMUD, the Sacramento MUNICIPAL Utilities District. Yes, in Sacramento they pay less, get better service, and it is a public service, much like we get our water from a variety of water districts. If PG&E is going to be bailed out by taxpayers, we must get something of equal value in return. Let's not do the thing we did with our banks in 2008-9 and just hand over gobs of taxpayer money to a private enterprise (in that case who were foreclosing on the taxpayer's houses and putting them our in the streets...) Bailing out PG&E without them paying a steep price will just let them know that they can burn the State down again in the future, and get away with it.
The taxpayer (utility customer) will pay - one way or another.