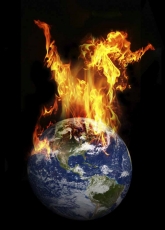 Exclusive to ECM: How decision could impact East County's transportation and energy production

The ruling could have significant consequences for East County, where numerous large wind and solar projects have been pushed through under the mantra of addressing climate change.

On one hand, the decision could bolster arguments of some Supervisors who view large energy projects as the fastest or easiest way to meet goals for reducing greenhouse gas emissions.

On the other hand, the ruling also forces the County to conduct an Environmental Impact Report - opening up the process for public comment. That could include discussion of how much fossil fuel it takes to manufacture, build and operate industrial-scale wind and solar projects--and whether there are better alternatives, such as solar on roofs and parking lots in urban areas.

“The County promised the people enforceable emissions reduction measures and deadlines, but the Climate Action Plan the County adopted was entirely voluntary,” said Cory Briggs, an attorney representing the Sierra Club.  The Judge agreed that the County failed to add teeth to its measure.To avoid finding that its 2011 General Plan Update would contribute to climate change problems, the County adopted Mitigation Measure CC-1.2, which required the County to prepare a Climate Action Plan to achieve the emissions reductions required by the Global Warming Solutions Act of 2006 (AB 32).  But the plan lacked teeth – and further, it was adopted without a supplemental Environmental Impact Report (EIR).

“It read like a wish-list,”  Malinda Dickenson, another attorney representing the Sierra Club, said of the CAP’s mitigation measure, which lacked any enforcement or consequences for non-compliance. “The Court upheld the law that mitigation measures are ‘not mere expressions of hope,’ and that our elected officials must make decisions based on the facts they have before them.”

Former Assemblywoman Lori Saldana, co-author of AB 32 and current Chapter Chair of the San Diego Chapter of the Sierra Club, said, “We very much appreciate the Judge acknowledging the scientific consensus that ‘enforceable mitigation measures are necessary now.’”

The judge’s ruling also found that the County violated the California Enviornmental Quality Act (CEQA) by not requiring a supplemental EIR instead of a mere addendum to the County’s 2011 Program EIR (PEIR).  That means the County must now conduct a supplemental EIR – and open it up for public input and comments.

Saldana told ECM that the most serious source of greenhouse gas emissions in San Diego County are vehicle emissions.  The second highest source of concern is emissions from power plants such as the proposed Quail Brush peaker gas-fired power plant.

“In terms of the impact on East County, we would prefer to see more people using transit—make it easier for people I East County to be able to use the trolley or high-speed rail,” Saldana said.

Asked whether the decision might add fuel to the County’s push for more large-scale and controversial wind and solar projects in East County, Saldana replied, “Distributed energy is more in line with the Sierra Club’s long-term energy plan, so not out in East County.  We would like to see urban solar, rooftop solar—ways to generate energy closer to the end users. Even the transmission lines are a potential fire hazard. We would like to see energy projects close to where they will be used.”

The Sierra Club has not yet formulated a position yet, however, on the proposed County wind ordinance set for hearing May 8 before the Supervisors, Saldana indicated.

Opponents of industrial-scale wind projects have long questioned why there are no statistics provided by the industry on how much fossil fuel is used to manufacture turbines (often in coal-fired plants overseas), ship them long distancess, and then construction projects that include bulldozing, blasting and excavating. How much carbon sequestration is lost by scraping bare thousands of acres of forests, chapparal or desert vegatation? Why are there no life-cycle studies tos how not only fossil fuel used up front, but also ongoing at wind sites, such as the hundreds of gallons per turbine of lubricating oil?  Moreover, since utilities contend gas-fired peaker power plants are needed as backup for when the wind doesn't blow, skeptics are now asking whether some wind projects in marginal areas may actually use more fossil fuel than they will save.

The County’s case was argued by Ellen Pilsecker, Deputy County Counsel.  She contended that the CEQA challenge was time-barred and that the CAP met all legal requirements.  The County also contended that some of the absent benchmarks could be found in Minutes of the Board reflecting its approval of CAP. The judge rejected all of those arguments, finding that the minutes do not set forth enforceable standards nor create ay mandatory duty that could later be enforced if those standards are not met.

Asked how the County could go about reducing greenhouse gas emissions,  Dickenson told ECM, “They could adopt certain ordinances in their jurisdiction. They could have more solar power generation on their own buildings. They could pass transportation policies for their own employees. There are so many things that they could do. “

The attorney added, “A good thing about this ruling is the County is required to come up with a supplemental EIR-- and the Supervisors will be required to listen to the community and consider available mitigation measures.”

Mike Bullock, Transportation Chair for the Sierra Club’s San Diego Chapter, concluded, “We have long been ready to help the County take action to reduce greenhouse gas emissions as required, and look forward to doing so now.”

I wish there could be a moratorium on ALL projects related to this final ruling until the County does what it is required to do.

Why does it have to take so long to get to this point?

Sadly, however, I'm afraid the majority of wilderness ravaging solar and wind farms will already be built by the time the Sierra Club's made a determination.