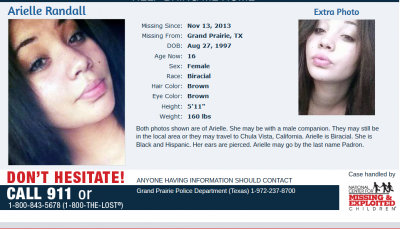 January 9, 2014 (San Diego) – Several recent sightings have been reported of missing 16-year-old Arielle Randall in the San Diego-Carlsbad areas, according to the National Center for Missing and Exploited Children.

The Center is asking for public help to locate the missing Texas teen, who may be in the company of an unknown male.  Arielle is black and Hispanic, with brown hair and eyes. She is 5 feet 11 inches tall and weighs 160 pounds. She has pierced ears.  She was last seen leaving her home in Grand Prairie, Texas on November 13, 2013 and has not been heard from since.

Earlier the center reported Arielle may have gone to the Chula Vista area and could be using the last name Padron, her mother's maiden name. She is believed to be a runaway and bought a ticket for the San Diego area, an investigator in Texas told ECM.

If you have seen Arielle or are aware of her current location, call NCMEC at 1-800-THE-LOST.  You can remain anonymous.

You can download a missing persons flyer and read more about Arielle Randall here: http://www.missingkids.com/poster/NCMC/1226136/1#poster