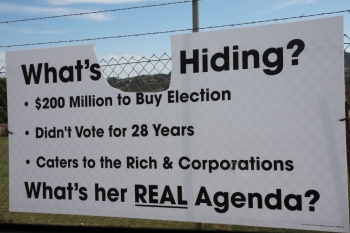 Sign-stealing is also alive and well this campaign season. El Cajon Mayor Mark Lewis told East County Magazine that a brazen thief stole one of his campaign signs—right off the Mayor’s front lawn. In La Mesa, at least two City Council candidates and both Mayoral candidates report thefts of their signs.

Madrid was also victimized by pranksters who attached an add-on reading “Mr. Drink and Drive” to his reelection signs. (Madrid has never been charged with drinking and driving, though a companion was following an incident in February 2008 in which the Mayor was escorted home by police after being found intoxicated on a public street. His opponent, Laura Lothian, has her own history of alcohol issues. Her 19-year-old daughter pled guilty to violating La Mesa’s social host ordinance by having around 100 under-age teen drinkers, Jello shooters and hard liquor at a party in Lothian’s home earlier this year.) 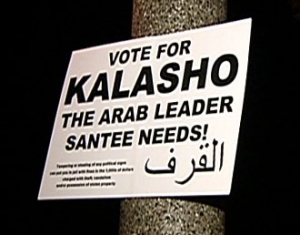 Santee Council candidate Ben Kalasho was the victim of a particularly ugly prank. Signs reading “Vote for Kalasho: The Arab Leader Santee Needs” with Arabic writing that translates to “disgusting, nasty” started popping up around the community, KFMB TV (Channel 8) reported. According to Jimmy Greene, when he contacted the Kalasho campaign to report the strange signs, “He said `The funny thing is, I’m Polish.’”

Stealing or vandalizing campaign signs can result in harsh penalties for offenders, including grand theft charges if a significant number of signs are taken.

Some people have fought back. A Congressional candidate in East County several years ago asked police to file charges against a primary opponent whose roommate was spotted taking signs. An El Cajon man was convicted of sign stealing in yet another case.

A homeowner who had a sign stolen elsewhere in East County replaced it with a new one that read “Though shalt not steal.”

A Santee resident, angered after an Obama sign was taken from his property, got the last laugh. He went to a copy shop, got an Obama sign enlarged to huge proportions and added his own message. “Someone stole my Obama sign. Vote Obama,” read the sign, which the homeowner also illuminated with lights to make sure passersby could read his new sign after dark. “The thief didn’t come back,” he told East County Magazine.

It's really strange that
campaign signs for Rick Augustine, Chris Winter, Gary Kelly and myself continue
to disappear or be pulled out of the ground and thrown in the street around our
neighborhoods, but the big ugly red union signs
remain untouched.

I am not blaming firefighters or the union,
just the pathetic
individuals involved.

I applaud Rick, Chris and Gary
for their help in repairing and replacing my signs they find and I will continue
to place signs or report to their campaign offices, for ALL candidates and
measures that I find laying down on the ground.

Aside from the signs and these noted juvenile acts whats wrong with buying an election? The unions and especially the teachers unions have been buying elections for decades in California without a peep of complaint. Now someone comes along and spends 200 million of her hard earned money and it's some kind of a sin. I look at it as a stimulus package that did not use any of my tax dollars for once. Think of all the jobs saved and created in the broadcast and print businesses by Megs 200 Million.

If you see a well-groomed woman with upswept curls stealing Art Madrid campaign signs, note her car license number and report the theft to La Mesa Police at 619-667-1400. That female sneak-thief isn't stealing small change. Guess I'm lucky she didn't make off with my potted epiphyllums and wind-chimes, too.

I had an Art Madrid sign in a flower bed in front of my house on a quiet East La Mesa residential lane. While looking out a front window about 5:30 PM Sunday, I saw a well-groomed woman in business dress, with a short or upswept coiffure with curls on top, cross the lane from in front of my house to a light colored, well-kept sedan parked on the opposite side. She hesitated, looked around, and got into the sedan. Something about this seemed out of place. My view was partially blocked by my front shrubbery.

On a hunch I rushed to my driveway and wrote down the license number as 21MM2110 as she drove away. Then I saw that my Art Madrid sign was gone.

The La Mesa policeman who responded to my call said they did not have a California listing for the license number I had written down (I have senior eyes.)

In an article in La Mesa Pulse, Laura Lothian termed vandalizing campaign signs a "prank". This is not a prank. Theft is theft, whether my Art Madrid sign is stolen by a well-groomed middle-class woman or my lawn furniture is stolen by a tattooed hoodie. And the well-groomed woman is just as much a thief as is the hoodie.

Funny how it seems people are getting so mad at defacing signs that are already illegally placed on city and county property like the trolley at Arnele and N Marshall and also at the bus station at N Marshall. I think someone needs a good fine like the people or corporation that is putting the anti Meg signs up.