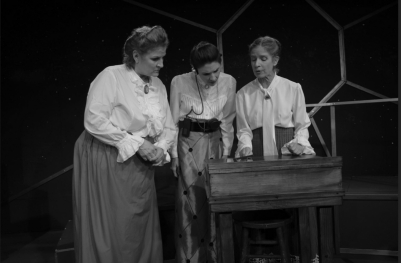 August 31, 2022 (La Mesa) - One hundred and one years ago on August 26, 1922, women won the right to vote.   Fittingly, Aug. 26 was opening night of Lamplighters Theatre’s production of Silent Sky by Lauren Gunderson. Disguised as a drama, the show is a gift of history, romance, family connections, and a touch of humor, without the happily-ever-after, depending on how you look at the story. "Simply Marvelous, well-acted, and well-written."

Silent Sky takes on women's rights through Henrietta Leavitt, Annie Cannon, and Willamina Fleming, women hired by Harvard to work as researchers (computers as they were known), collecting data for the men. They weren't allowed to use the telescope. But each managed in their own way to contribute to the history of our scientific world. Based on real women, Lauren Gunderson does an amazing job of writing this play. It’s balanced perfectly among elements, not some boring scientific story above the heads of most of her audience. 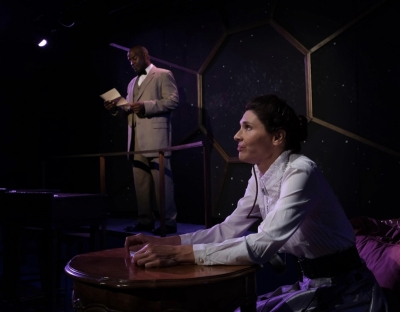 Kathryn Schellinger is the lead as Henrietta Leavitt, the youngest member lured to a job at Harvard. She wants to know where in this universe she is located--and keeps asking until she gets answers. Schelliinger is starting to make a name for herself in community theatre. Her two companions are veterans with many shows under their belts, an entertaining bet no matter what roles they play. Heather Dearfielld recently took on Hercule Periot and is now Williamena Fleming, Scottish scientist computer. Number three of the trio, Amy Dell, portrays Annie Cannon. Her dry wit has you laughing every time.

Director Mary L. Smith has two other actors in the show: Edna Carel, who plays Henrietta’s sister and Omar Murrell, who plays Peter Shaw, the man in charge of the women. He rarely disturbed them until Henrietta joins the team. A smitten man,he now comes by regularly. Although these characters are dearly loved, they are not quite as polished as the other three. Given a few more shows, I'm sure they will get there. 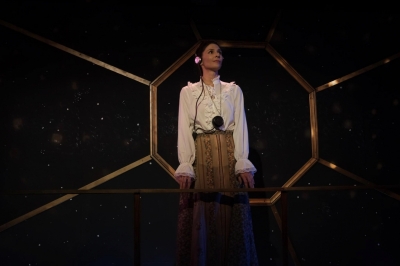 The setting is 1900 – 1920 at Star Field, The Harvard Observatory, the Leavitt home in Wisconsin. an ocean liner on the Atlantic, and Henrietta's home in Cambridge, Massachusetts. Lamplighters has done an excellent job of making use of the stage. Very little is done to make each setting work, yet you feel like you are in each place.

The theme is you have what it takes to make it happen. Dig deep--the answer is there.

Women still fight the battle of equality in the workplace, a battle moving as slowly as others in life. But recognition can be earned.

You have what it takes to keep community theatre alive--spending time with a loved one enjoying a different pace, escaping to the theatre and living someone else's life for a couple of hours,