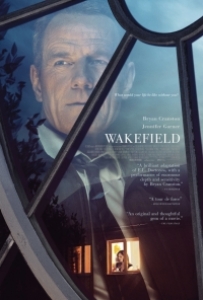 “If the reader choose, let him do his own meditation; or if he prefer to ramble with me… I bid him welcome.”

June 21, 2017 (San Diego) -- What would it be like to become a ghost in your own life? To be a voyeur in your private world? In this film adaptation of E.L. Doctrow’s short story “Wakefield” we see Bryan Cranston in the role of Howard Wakefield, a man who wants a time-out on his life. He doesn’t want to change his life so much as put it on hold. This is not a story of  a mid-life crises as it is a tale of human breakdown from the daily pressures

“To me Wakefield’s actions seemed rooted in privilege,” said director Robin Swicord. “A man who’s lived with a surfeit of good fortune, who’s never had anything bad happen to him, a man protected by money and education and Anglo-Saxon heritage, one day capriciously decides to invite disaster. To what end, I wondered? An idea of self-annihilation seemed to hover over the story. Was he punishing himself? For what crime?”

Doctrow adapted his own story from a 19th century tale by Nathaniel Hawthorne. Hawthorne’s short story was set in London, in which a man disappears from his own settled life, with no explanation; then lingers in a boarding house across the street to watch what happens. In this story, Howard Wakefield chooses his attic apartment over the family garage.

Swicord, who also wrote the script for this wonderful little film about human absurdities, creates a soft, almost Hitchcockian mood. There is a mystery to this story. We keep waiting for the mystery to unfold. Is there a crime afoot? Is someone being unfaithful? Why would a successful, upper-middle-class man simply exit his life on complete whim?

Cranston brings good comic timing to this mysterious human drama. His diction and facial expressions remind one almost of Robin Williams (a distinctly less peripatetic Robin Williams). He demonstrates the inherent insecurity of a man who wants to see what goes on behind his back. He discovers the scary and meaningless existence of a man operating behind the scenes of life, the way homeless people exist, and he swiftly discovers how invisible a human being can become when they have divorced themselves from the conventions of a clean shaven face, a shower, a nice set of clothes and interaction with all but those poor souls also existing in invisibility from society.

Howard’s wife Dianna is ably played by Jennifer Garner. Looking better and sexier now than 20 years ago, Garner under acts emotional scenes and we feel sympathy for her character without losing any sense of her character’s strength. She is bewildered by what has happened to her husband and there are genuine moments of emotion, but there is also the fundamental anger a person would feel at the idea she and their two daughters have been abandoned.

“Wakefield” is abusrdist theater and thus, obvious questions of how a man could simply hide in his garage and not be found must be set aside to enjoy the entire complexity of a story of a man in our modern age wanting to disappear without having to make great changes to his life. It is a fun movie with a nice, rainy-night feel to the musical score by composer Aaron Zigman.

“Wakefied” is currently playing at the Ken Theater in Kensington and will also play at the Hillcrest Cinemas.