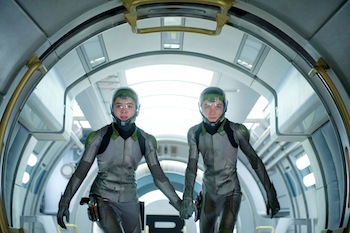 November 1, 2013 (San Diego) – Ender’s Game views warfare, military training, and combat from a unique perspective: a child’s.  The air is filled with an aura of childhood innocence.  The very real threat of humanity’s annihilation is hard for these young recruits to completely comprehend because they haven’t experienced life and the world as much as grown-ups have.

This threat comes from the Formics, an alien race that killed tens of millions of humans fifty years ago.  If it weren’t for the bold sacrifice of fighter pilot Mazer Rackham, who destroyed the mother ship in a kamikaze attack, Earth would have been destroyed and colonized by the Formics.  The war, however, hasn’t been won.  All of the world’s nations pool their resources and form a military comprised of kids and teenagers with intent to destroy the race before they invade.  The logic of using kids instead of adults, according to the movie, is that kids can take in and process massive amounts of information faster and easier than adults, a trait needed for this particular battle in which decisions must be made in literally less than a second.  Andrew “Ender” Wiggin (Asa Butterfield) immediately emerges as the clear leader, and effortlessly rises through the ranks.  After a while, he starts questioning the program and what he’s being asked to do.  These concerns eventually become justified in an awkwardly plotted, forced, and ham-fisted ending.  More on that in a bit.

Ender’s Game is a sensory treat.  The simply constructed sets act as a canvas for arresting colors and enveloping and intricately designed computer generated effects.  (I’m surprised the movie wasn’t at least retrofitted for 3D.)  The space station’s sterile gray walls form such a palette, as do the mud brown, desolate planet where the final battle takes place.

Cinematographer Donald McAlpine’s symmetrical compositions serve more useful purposes.  Sometimes they evoke a certain mood.  In at least one shot, McAlpine places the camera square in the middle of the barracks, with the kids standing next to their bunks on both sides of the room.  Sergeant Dap (Nonso Anozie) stands in the center, facing the camera.  The shot evokes commanding authority, as Dap stands out, and attention is focused on him

During the zero gravity battle simulations, it’s subtler.  The left and right lack symmetry, but the centering of the camera renders the action fluid and comprehensible rather than confusing.  By consistently sticking to this framing, the visual rhythm is smooth, even in action sequences - at least they feel like such - in which much occurs.

The zero gravity battle simulations utilize a unique camera movement that simulates weightlessness.  In a few shots, the camera swirls 360 degrees with the characters.  It’s one of those shots that are fun and exhilarating to experience, but I’m glad they weren’t overused.  I liken it to the Green Lantern: First Flight roller coaster at Six Flags Magic Mountain.  The roller coaster starts at the top and rolls along the track, flipping its riders several times uncontrollably as it makes its way down sharp curves.  The only big difference between that ride and the weightless feeling of the aforementioned spinning shots is that the former gave me headaches from the pounding my head took from the headrest while the latter made me only momentarily dizzy.

The photography, at least in IMAX, is a splendid exercise in film art, but Ender’s Game runs into several problems that prevent it from reaching its full potential.  The acting at times is too difficult to watch, particularly that of the young cast.  They are good actors, no question about that.  Asa Butterfield was marvelous as the titular Hugo, directed by cinema master Martin Scorsese.  Hailee Steinfeld is the only actor I can remember in the Coen Brothers’ True Grit, which is surprising considering it featured three actors of high caliber (Jeff Bridges, Matt Damon, and Josh Brolin).  Moises Arias, who plays the mean leader of the Salamander Army, Bonzo Madrid, overdoes it.

I don’t blame the actors.  Look at the previous paragraph and you can see whom Butterfield and Steinfeld worked with.  Gavin Hood, on the other hand, most recently directed X-Men Origins: Wolverine, one of my least favorite comic book movies (although, to be fair, that's the only film of his I've seen besides Ender's Game).  Even the adult actors (Harrison Ford and Viola Davis) aren’t given the direction they deserve.

As the film nears it’s surprisingly fast end – it goes by fast without a watch – it ventures into sappy territory.  Abigail Breslin’s character is used to manufacture sentimentality and longing in Ender, with a few tears thrown in for good measure.  The ending is badly conceived, and in some ways upset me.  It’s the first false ending I’ve ever seen that turns out to be the actual ending!  There’s nothing more disappointing than being cheated out of a great ending, especially after devoting two hours of quality time.  Furthering the film’s woes is an abrupt dose of moralizing.  Ender’s Game could have used a reset button.

Brian Lafferty is an award-winning film critic and assistant editor currently living in San Diego and graduated with a B.A. in Radio-TV-Film from California State University, Fullerton.  In 2013, he won a San Diego Press Club Award for his film criticism, taking third place for his review of Before Midnight.  He welcomes letters at brian@eastcountymagazine.org.  You can also follow him on Twitter:  @BrianLaff.