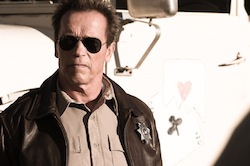 January 18, 2013 (San Diego) -- It seems like it's been forever but Arnold Schwarzenegger, to borrow a familiar line, is back.  The Last Stand is his first starring role since Terminator 3: Rise of the Machines ten years ago.  It’s apparent the transition from governor back to actor isn’t easy for him.  His timing isn't as sharp as it was in True Lies and at 65 he’s not as physically overpowering as he was twenty years ago.  I liken it to someone relearning how to drive a car after having not driven for many years.

Of course I knew going in all of that was to be expected.  Sure enough, these are minor quibbles.

Arnold plays Ray Owens, the Sheriff of a small border town with a population so small it can be counted on a person’s fingers.  He has three deputies to assist him.  Sarah (Jaimie Alexander of Thor), Jerry Bailey (Zach Gilford of TV's Friday Night Lights), and Mike Figuerola. (Luis Guzman, whose character is similar to, but funnier than, his comic relief one in last year's dreadful Journey 2: The Mysterious Island.)  What they don't know is that their small town is an entry point to Mexico for escaped and extremely dangerous Mexican cartel leader and death row inmate Gabriel Cortez (Eduardo Noriega of The Devil's Backbone and Open Your Eyes) whose modified Chevy careens through the state of Arizona at almost 200 miles per hour with a female federal agent as a hostage.

The best Arnold Schwarzenegger movies are those that, however violent and serious, have a sense of humor.  The Terminator movies, especially T2, have a high body count, but they're not without laugh out loud moments.  The Last Stand is ridiculous, and it knows it and revels in it.  It’s like a funny joke about Arnold and his immortal screen persona and everyone, including the star, is in on it.  The one-liners typical of a Schwarzenegger film aren't as quotable, or even memorable as they used to be; indeed I cannot remember any.  But Arnold’s familiar persona shines brightly.  His frustrations, his stoic nature, his deadpan delivery make up for all other deficiencies.  It may be more of the same, but this same is welcome after an eight-plus year absence.

Equally ridiculous - and I mean that positively - is the level of violence.  Graphic violence is nothing new to Korean director Kim Jee-woon.  The Good, the Bad, the Weird - his take on the spaghetti western genre - was gleefully violent, much of it adding to the film's humor.  On the other end of the emotional spectrum came the violence in I Saw the Devil.  In that film, it was brutal, utterly sadistic, and horrifically graphic.  Like The Good, the Bad, the Weird, it was equally gleeful in execution, but it was a perverse glee.

Kim Jee-woon isn't content with mere bullets, squibs that spurt a paltry amount of blood, and standard fisticuffs.  No, there must be blood by the bucketful.  It isn't enough for a bullet to penetrate the head.  It must cause brain matter and a bucketful of blood to explode from the exit wound.  In the climactic showdown between Owens and his deputies he uses a World War II-style machine gun to dispatch the henchmen.  One of them doesn't think to remove a pack of combustible ammo from his back.  So when he's shot, the ammo ignites and causes him to explode in several pieces.

Before the showdown comes the extended chase sequence in the modified Chevy, which lights up the radar gun at 197 miles per hour to start the film.  The trick for screenwriter Knauer and editor Steven Kemper - one of director John Woo's go-to cutters, having worked on Face/Off, Mission: Impossible II, and Windtalkers - is to maintain the excitement and suspense of each of these scenes while keeping them fresh.  They, and Kim Jee-woon and his cinematographer Kim Ji-yong, fulfill their duties.  Knauer's script subverts every expectation and cliché, and manages to find a way to surprise every time.  Both Kims frame each shot perfectly, showing not necessarily the whole picture, but enough for anybody to follow the action.  Kemper's editing isn’t fancy, but his semi-predictable and jolting cuts enliven the action without compromising the rhythm.

I could not be happier the day actor-turned-governor Arnold Schwarzenegger was termed out of office.  It had little to do with politics and mostly everything to do with him returning to the movies.  He was my favorite actor growing up.  True Lies, my favorite of his films, was one of the very few R-rated movies my parents would let me watch in elementary school.  I will never forget the experience of watching, at around 10 or 11 years old, Total Recall with my parents, my sister, and her then-best friend (who thought it was one of the grossest movies she ever saw).  I had no idea what was going on, but there were boobs and, well, Arnold.  Will he regain his superstar status?  Only time will tell.  But The Last Stand is a good start.

The Last Stand is now playing in wide release.