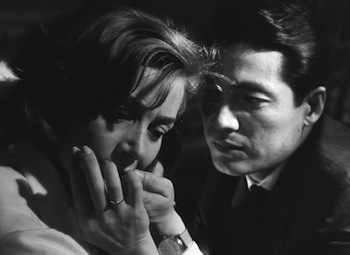 Hiroshima Mon Amour is a simple tale of a love affair between a French actress named Elle (Emmanuelle Riva) and a Japanese architect named Lui (Eiji Okada). Both are married and apparently living happy lives. However, both become consumed with the unbearable knowledge that they will never see each other again. The movie is an extended conversation between the two augmented by flashbacks of World War II as experienced by the actress.

Following the credits is an apparently symbolic shot of the couple making love in bed, their naked bodies covered in what appears to be ash and remnants from an atomic bomb explosion, before dissolving into one where they're covered in sweat. Alternating with these shots are images of Hiroshima following its bombing, beginning with a hospital visit where a middle aged Japanese lady gazes confusingly and despairingly. Then it follows with a trip to a mostly empty museum, its exhibits a visual reminder of the devastation experienced by the citizens of Hiroshima, devastation nobody seems to want to confront. Following that are shots of the living victims, including burned babies, disfigured women, and deformed children born to mothers victimized by the bomb while pregnant.

When these shots are juxtaposed with passionate lovemaking, the combination exhibits a dark subtext that further supplements the raw and visceral undercurrent omnipresent in the latter.

The combined efforts of Sacha Vierny and Michio Takahashi result in an unforgettable ghostly black and white photography. Their lighting techniques hold the key to evoking the film's themes of haunted pasts, guilt, and forbidden love, as well as the characters' emotions as they confront these themes.

The two cinematographers firmly establish this with the very first shot. Dark, barely lit, and shadow-heavy, it amplifies the aforementioned dark undercurrent already in place and ups the eroticism. When the story moves to the streets of Hiroshima, where Elle is shooting a movie, the lighting hits the actors and their surroundings in a manner that resembles the feeling of a pleasant dream that feels so real, you forget you're merely sleeping.

It's not only the lighting that elicits these feelings. The camera mobility is also a major factor. Most unusual is the manner with which the camera moves. Using dolly shots usually moving from left to right, it adds a tiny layer of surrealism to certain scenes, notably the museum and hospital seen in the opening sequence.

Hiroshima Mon Amour is not a collection of haunting images despite what this review may or may not have led you to believe. Marguerite Duras' Oscar-nominated screenplay is a 90 minute long conversation between Elle and Lui about politics, war, and love. Duras and Resnais employ flashbacks to augment the dialogue-heavy scenes. They are not, however, the traditional sort. They are presented without sound or dialogue as Elle describes a period of time during World War II when she experienced a bout of madness over her parents forbidding her romantic involvement with a German soldier. Riva's voice as her character talks is as haunting as what's seen on screen. In fact, it takes this sequence to a whole new level by forcing audiences to fill in the audio blanks, which, combined with Riva's narration, display her inner torment.

The relationship between Elle and Lui is beautiful in its lust and tenderness. Seeing these two together makes the thought of them never again meeting as unbearable for me as it is for them.

After 45 years and a newly restored print, Hiroshima Mon Amour still mesmerizes. To watch it is to watch poetry in cinematic motion.

Brian Lafferty can be reached at Brian@eastcountymagazine.org.