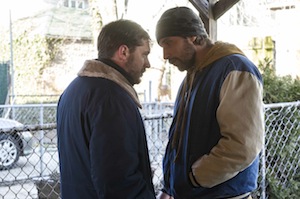 September 24, 2014 (San Diego) -- I don't know if Michaël Roskam is a man of few words, but his films certainly are. He burst onto the international film scene with the Oscar-nominated Bullhead (2012), which took its sweet time (about halfway in) to fully reveal the tortured past of its protagonist (Matthias Schoenaerts). The Drop, only his second feature film and his first in the English language, further cements his reputation as a cagey storyteller.

This time Roskam sits solely in the director's chair (he wrote Bullhead in addition to directing it) and leaves the writing duties to novelist Dennis Lehane.  Lehane's works are no stranger to Hollywood; notable adaptations include Mystic River (Clint Eastwood, 2003), Gone Baby Gone (Ben Affleck, 2007), and Shutter Island (Martin Scorsese, 2010).

The Drop stars Tom Hardy as a socially awkward bartender who finds himself an unwitting pawn in a double cross between his boss (James Gandolfini) and Chechen mobsters who use their establishment to launder money. On his way home one night, he takes pity on a beat up Pit Bull puppy dumped in a trashcan. In doing so, he meets Nadia (Noomi Rapace) a meek lady still recovering from an abusive relationship she ended some time ago. Her ex, Eric (Matthias Schoenaerts), wants her back and stalks Bob at home and at work.

At the risk of reading too much into it, based on Bob's idiosyncratic social behaviors, I'd hazard a good guess he's Autistic. His conversations with Nadia closely resemble those I have when getting to know new people: his speech is stilted, his voice projects hesitation with each sentence, and he's little aware of how others perceive or may perceive his actions and words. Another possible giveaway appears when he wraps a detached human arm in butcher paper as if he’d done it a thousand times. When his boss points this out, it doesn't occur to him how weird it looks.

Hardy's unassuming performance almost, but not quite, allows the supporting cast to overtake him. Gandolfini, in his final role as Bob’s cousin, appears to be a warm father figure, although not averse to practicing tough love. However, on the inside he's more dangerous and ruthless than his exaggerated New York accent and tough talk indicate. This dark side violently emerges several times, each instance gasp inducing and unsettlingly brutal, effects that I doubt wouldn't have been as well achieved and earned if his performance was directed differently.

Most overpowering is Matthias Schoenaerts as Eric Deeds. He continues to build on what worked excellently for him in Bullhead: a muscular brute with a dangerous violent streak, only this time he's not impotent. He's one of the few characters I've seen that scared me. Many have intimidated me, but this man truly got to me. I've read a lot about Ray Rice and I saw the video of him knocking out his then-fiancée. Not too long ago I witnessed up close a domestic squabble on the bus that turned physical. Eric embodies all too well the typical abuser. His physique and uncontrollable temper strikes fear when he stands next to Bob and Nadia. When I read the unfortunate and tragic statistics concerning domestic violence, I think of people like Eric and what they’re capable of. (Credit goes to this Slate article for leading me to that powerful link.)

Even though the photography consists mostly of medium shots and close ups, the actors do such an excellent job expressing their emotions and putting everything into their performances without going overboard, that it's hardly noticeable. Regardless of how far cinematographer Nicolas Karakatsanis places the camera, the surroundings eerily convey feelings of coldness and darkness reminiscent of the frigid, icy weather that aligns with the tense emotional undercurrent.

Lehane punctuates the screenplay with exceedingly violent scenes. To describe them in detail would undermine the effect upon a first viewing. It should be known, however, that were it not for the combined efforts of everyone involved, the impact from these acts would not be as profound and earned. They usually emerge straight from the realm of nowhere but they don't happen arbitrarily.

Roskam is a director to watch. While The Drop may not stay with me as long as Bullhead has over the last three years, it remains proof that no matter where he films and what language his actors speak, he has proved himself capable of making intense and visceral movies.

The Drop is currently playing in limited release.