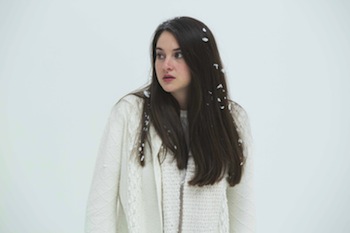 October 31, 2014 (San Diego) – For a film directed by Gregg Araki – well-known for anarchic, usually erotically charged films like The Living End (1992), The Doom Generation (1995), and Mysterious Skin (2004) – White Bird in a Blizzard is unusually peaceful. While small traces of his trademarks – teenage angst, sex, and homosexuality – appear, his latest film is his most accessible by far. Whether that's refreshing or disappointing will depend on how much you're willing to readjust your expectations.

Based on a novel, White Bird is mostly set in 1988. 17 year old Kat (Shailene Woodley) and her parents Eve (Eva Green) and Brock (Christopher Meloni) live in a peaceful suburb. What goes on in their house is anything but: Eve and Brock constantly fight and haven't slept in the same bed for years. Eve's erratic behavior - walking in on Kat in the bathroom, seducing her boyfriend Phil (Shiloh Fermandez), and passing out on her bed at 5:00 in the evening - doesn't help, either. One day she disappears, leaving Kat to wonder where she is while exploring her sexuality with Phil and the Detective (Thomas Jane) investigating the case.

As is often the case with Araki's films, White Bird is aesthetically pleasing. The crisp lighting enriches and slightly darkens the saturated color palette, which consists mostly of the secondary colors orange and green and their various shades. The dream sequences, set in a remote mountain and forest overtaken by a massive blizzard, consequently stand out. The ultra-strong white helps maintain the surrealistic qualities associated with strange dreams. In many ways it reminds me of the bleached-out dream sequence at the beginning of one of my all-time favorite films, Wild Strawberries (Ingmar Bergman, 1957).

There are two distinct types of Araki scripts. Some of his films – The Living End, The Doom Generation, and Kaboom (2011) – are driven by chaos, violence, sex, and anarchy. The rest – Totally F***ed Up (1994) and Mysterious Skin to name a couple – are equally rebellious, but on a much smaller scale; they emphasize character development over plot and explore in great and incisive detail the (usually teenaged) characters' inner torment, anguish, and unhealthy appetite for sex.

White Bird, as you might have guessed falls under the latter category. While not as narratively experimental as Totally F***ed Up nor as erotically intense as Mysterious Skin, it nonetheless offers a richly detailed portrait of a teenage sexuality and an engaging mystery. Even though anybody who has ever watched TV's 48 Hours, Dateline, or any crime drama will correctly guess what ultimately happened to Eve, the mystery is still gripping and it ends in a genuinely crazy twist that comes straight out of nowhere, but makes sense in the context of the events leading up to it.

I can think of few actresses today more suited for the role of Kat than Shailene Woodley. The versatile and busy actress (White Bird is her third film released this year so far) is skilled at playing troubled teenagers; see The Spectacular Now (James Ponsoldt, 2013). Her performance here is much more subtle and quiet. Kat's unhealthy appetite for sex is a lot less overt than what Araki's characters usually display. It's more private and deep down. It's not dissimilar to how people really feel when they're depressed, not like how obvious it's portrayed in the movies. Her indifferent reaction to her mother's disappearance is strange and unusual, but still makes sense when her relationship with her family is taken into account.

White Bird is unusually serene for a director who specializes in anarchy. The atmosphere is calm and peaceful. The characters speak in soft tones of voice. The camera is mostly stationary and placed on a tripod. Of the films of his that I've seen – all except Smiley Face (2007) and those that haven't seen a Region 1 DVD release – this is the most conventional. But as Araki demonstrates, even when his movies are set in (mostly) peaceful times, there's no telling what will happen next.

White Bird in a Blizzard is currently playing at the Landmark Ken Cinema.

Brian Lafferty can be reached at brian@eastcountymagazine.org