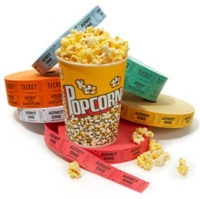 February 28, 2011 (San Diego) – Take one part Luis Buñuel, add one part David Lynch, throw in a sex comedy and what do you get? Kaboom, the newest film by independent director Gregg Araki. Currently playing at the Landmark Hillcrest, it is among his better works.

Kaboom is about Smith (Thomas Dekker), a gay college freshman. He constantly dreams about a door, a few women (who he will later encounter in the real world), an older man, and a dumpster. In the real world he combats his feelings for his male roommate, Thor (Chris Zylka), who may or may not be gay. He meets a British girl, London (Juno Temple) and the two engage in a sexual relationship. A surreal conspiracy involving men dressed in animal masks surrounds these events.

Like some of David Lynch’s work, a dreamlike atmosphere permeates throughout Kaboom. As the film progresses, Smith has difficulty distinguishing dreams from reality. The film’s absurdist tone and characters reminded me of Luis Buñuel, arguably the foremost surrealist director; at one point Smith watches the infamous opening of Un Chien Andalou, a short Buñuel made with artist Salvador Dali in the 1920s.

I was constantly involved in the mystery. Araki constantly withholds as much information as he can until the very end. He does offer scant clues, but for every question answered at least three more pop up. When everything is revealed, nothing is arbitrary. Araki’s tight grip on the plot could lead one to disagree. In retrospect, however, everything adds up and makes sense. The set-ups planted in the beginning logically pay off at the end.

When not concerned with the surreal conspiracy, Kaboom spends its time in the bedroom. Araki’s films contain a lot of sex and Kaboom is no exception. The sex in his earliest work is dirtied by nihilism, anarchism, and terminal angst. Araki opts for a lighter touch this time around, with funny results.

The sexually charged (but non-explicit) script follows a cardinal rule for making a humorous sex comedy: the sex must be taken seriously or else it isn’t funny. The funniest moment features Smith, London and a certain noise; the nature of the noise, my reluctance to spoil the punch line, and this being a family publication prevent me from specifying.

Filmic intertextuality, or references to other movies and filmmakers, is another Araki staple. The French New Wave inspired his earliest work’s rebellious nature, unconventional editing and visual style, and unstructured plots.  This time Kaboom owes a lot to Lynch and Buñuel but Araki makes everything his own. I wonder what he’ll dream up next.

Kaboom is currently playing at the Landmark Hillcrest.