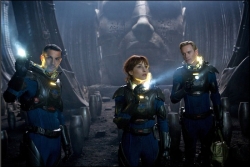 June 11, 2012 (San Diego) – I attend every screening with a pen and small notebook in hand. I have a strong visual memory, but it never hurts to jot down certain things I may later overlook. For Prometheus, I wrote only three brief sentences before I put the notebook down. This film had the tractor beam effect on my eyes. I sat fully entranced, unable to look away.

This magnetic tug begins at the outset with the death of a humanoid alien on prehistoric Earth, and its body disintegrating in the water. Flash forward to 2093, when Elizabeth Shaw (Noomi Rapace) and a crew of scientists and explorers descend upon a distant moon with a surface possibly capable of sustaining human life. They discover the ruins of a long-dead civilization. Later, they battle an alien being that threatens to kill the entire team.

Prometheus starts out, for lack of a better word, slowly. For a while, it’s primarily concerned with the awe of exploration. Ridley Scott and cinematographer Dariusz Wolski express it with a parade of epic, engaging images. They employ an extremely limited color palette. While the titular ship’s interiors are colored with dark-toned blues, yellows, and greens, the moon is practically devoid of color. The crew’s flashlights illuminate the ruins’ black tunnels in a moody effect that requires a theatrical viewing to be one hundred percent effective.

Sometimes cinematography is less about the quantity of colors and lighting and more about what the filmmakers do with them. Scott and Wolski find beauty and poetry in the moon’s barren, nearly colorless surface. Wolski uses a wide-angle lens to film the moon and its ruins’ labyrinthine tunnels. The epic-looking deep focus that results is the primary cinematographic hook.

After this exploration comes action and suspense. At some point, maybe halfway in, everything goes awry. The pacing turns from slow to a steady increase of urgent rapidity. It transforms into an action film, but not disconcertingly. The change is organic, and it still retains the magnetism present in the preceding scenes. Pietro Scalia’s natural and unforced cutting contributes heavily to this.

Prometheus isn’t flawless, but then what is? The acting by everyone is pedestrian, except for Michael Fassbender as the Android. Noomi Rapace first made her mark this side of the Atlantic with the 2010 Swedish import, The Girl with the Dragon Tattoo and its two sequels. Last year, she made her Hollywood debut supporting Robert Downey Jr. in the sequel to Sherlock Holmes. Prometheus is her first leading role here in the States. I don’t know what it is, but there’s something about Hollywood that prevents her from shining like she did in Dragon Tattoo.

It’s like this. Suppose someone transmits an image, but before he does, he scrambles it. This scrambled image is then sent to another area, where his counterpart unscrambles it. For some reason, the unscrambled image doesn’t add up the same way. I’m not saying Rapace isn’t good. She gives a solid, serviceable performance. I don’t see the same actress I saw back in 2010.

The script may be exposition-heavy, but it honestly didn’t bother me much. I was too engrossed by the images. Ridley Scott is renowned as a visual director, and this is true for at least the early portion of his career. Alien’s claustrophobic sets; Blade Runner’s visual portmanteau of neo-noir and futurism; Legend’s lush colors and lighting; and Thelma & Louise’s epic scope of the modern American West are all exemplary of his visual prowess. Prometheus further illustrates his mastery of the movie camera.