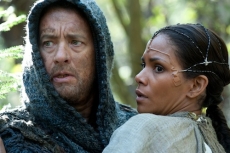 Cloud Atlas is by no means as exceptional a film as those two.  Epic, yes.  But one of the year’s best?  Hardly.  In the theater, I didn’t know what to think (indeed, my notes were as sparse as they’ve ever been; I’m relying on my normally reliable photographic memory, courtesy of my Autism, for this review), but I enjoyed what I saw.  As I settled into bed that night, I told myself to sleep on it.  I did.  As I awoke from my slumber, everything suddenly hit me like a rock.  I will never know what it was, but during the seven to eight hours of sleep, something opened the floodgates of appreciation, appreciation that still flows even as I write.

Adapted from the novel by David Mitchell, this nearly three-hour film weaves together six tales linked in some way by its characters’ past lives.  They are a slave trader in 1849 rescuing a stowaway; a young male closet homosexual student blackmailed into working with a crusty composer; a female reporter in 1973 who investigates a murder linked to a shady energy corporation; an elderly publisher who, with the help of his estranged brother, escapes from gangsters, but finds to his horror that his brother betrayed him by sending him to a nursing home that might as well be a prison; a young woman clone who is rescued by a rebel in 2144 Neo Seoul, which has become a totalitarian state; and a tribe leader in post-apocalyptic 24th century Hawaii who enlists the aid of an alien to save his people from the oppression of a hostile warrior tribe.

Normally, a movie will have a maximum hybrid of two genres, namely action-adventure and comedy-drama.  Most are content with only one.  Cloud Atlas has six.  They run the gamut of seafaring, drama, thriller, comedy, science fiction, and fantasy.  That's ambitious.  But the directing and writing triumvirate of Tom Tykwer (Run Lola Run) and the Wachowski Starship (Andy and Lana Wachowski) keeps the story flowing.  In retrospect, I'm amazed at their ability to frequently cut from one completely different story, genre, and tone to another with grace and composure.  Even though I easily guessed which segments were written and filmed by the Wachowskis and those done by Tykwer, Cloud Atlas is unified in atmosphere, flow, and continuity.

Cloud Atlas’ main hook is the cinematography and mise-en-scene.  Most illustrative is the Neo Seoul segment, although the same can be said to various degrees for any of the other segments.  At night, the city is heavy on imposing dark blues.  The towering skyscrapers reek of untold wealth and authoritarianism.  The metropolis is so intricately designed that even when the Wachowski's throw everything at the audience during the chase sequences, there's still time to take everything in.  I found the shoot-out scene that took place between two buildings at least a hundred stories high more thrilling than many I’ve seen because of the directors’ use of deep space; the detailed design of the hundred stories below that makes it look like they’re really that high (I envy those who will see it on an IMAX screen; watch the tower climbing sequence in Mission: Impossible – Ghost Protocol to see what I mean); and the unhurried cutting and impeccable shot selection that goes from under the characters’ feet, to one side of the “bridge,” to wide shots surrounding the “bridge.”

While Cloud Atlas harkens back to the cerebral films of last year, unlike them, I found it too confounding and convoluted in its meaning.  The stories are linear, but they don't clearly illustrate the impact or connections they have on the characters' future lives.  I don’t need a film to spell everything out to me with loads and loads of exposition; The Tree of Life, 2011’s most cerebral and abstract film, used a mosaic approach to its narrative that may have looked “random” but was ultimately easy to connect.  Cloud Atlas’ narrative isn’t random, but I’m still trying to piece together many of the connections and unifying themes.  Some are easy, like imprisonment and authoritarianism.  However, I’m still trying to connect the dots as to how each character’s past lives impacted their future lives.  At least I know I won’t be alone in deciphering this film.