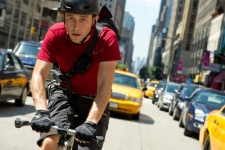 August 24, 2012 (San Diego) – This week I’ve seen three signs that summer is almost over in San Diego: the weather is getting cooler, kids are back in school, and Hollywood - having exhausted all their major moneymaking, audience-pleasing blockbusters and comic book movies – are now releasing simpleminded films like Premium Rush apparently because there's nothing left until awards season.

What's often overlooked is that these are sequences that are but one of many essential pieces of these masterpieces. Premium Rush ekes and stretches out what would normally be a ten-minute chase sequence into an hour and a half of turgidity. In this case, it's a Manhattan bike messenger boy (Joseph Gordon-Levitt) being stalked and pursued by a desperate, dirty cop (Michael Shannon) in deep financial straits with Chinese gangsters. He doesn't know why until he sees the little piece of paper in the envelope he's entrusted with is worth hundreds of thousands of dollars.

If it were just ten minutes, that would be one thing. Making it feature length is another. At least ninety percent of Premium Rush is Gordon-Levitt pedaling fast and furiously through Manhattan. I wouldn’t mind it if the film found a way to make it thrilling, creative, and non-repetitive. I wish that were the case. After a short time, it gets tiresome. Every whoosh and rush as he careens through the streets leaves no chance for adrenaline to pump through the body. No matter how many cars trundle through the streets, the film lacks in the suspense department because everybody knows that Levitt isn't in any real danger, at least until the climax at the end. The hundred-plus car dodgings and near misses become rote and prosaic.

It may not be suspenseful, but it surprisingly isn’t confusing, at least visually. Cinematographer Mitchell Amundsen's wide shots supply an ample sense of direction and surrounding. Not once did I feel I never had the whole picture, nor did I feel confused. There is a flipside to this accommodation, however; many of the takes linger one to three seconds too long. This may account for why I didn’t feel any thrills. At least the editing and photography are executed competently, and they do allow adequate time to adjust to each twist and turn.

The acting made my jaw drop wide open. Literally. Only Gordon-Levitt manages to play it seriously and with conviction. The rest of the cast has trouble finding the right note. Prominent among them is Michael Shannon, who is much, much better than this. He mugs, screams, and goes way overboard past the valley of caricature.

Don't be fooled into thinking this is a simple story; director and co-screenwriter David Koepp needlessly convolutes the plot and tries to build a mystery that is more frustrating than fun to figure out, although it does make complete sense by the end. Koepp is best known for his work as a screenwriter, and even within the creative constraints of Hollywood commercialism, he routinely excels in his craft. Jurassic Park, Panic Room, and Spider-Man range from small scale films to mammoth blockbusters that have several elements in common: deeply crafted and intelligent human characters, gripping fear and suspense, and substantial, yet intricately plotted narratives. Premium Rush contains none of these elements.