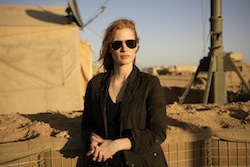 January 4, 2013 (San Diego) -- A day or so after the Zero Dark Thirty screening, a colleague wanted to know why I said it would rank very high in my Top Ten list.  I struggled to come up with an answer.  At the time, I just knew in my heart and somewhere in my head that it was not only one of the best films of the year, but the best Hollywood film of 2012.  I had this same feeling as I watched Samsara, Compliance, and In Darkness.  In each case, it wasn't until I wrote the reviews that I figured out why these films would earn spots in my upcoming Best of 2012 column.

Zero Dark Thirty is a dramatic retelling of the CIA's ten-year manhunt for Osama bin Laden, mastermind of the horrific attacks on September 11, 2001.  Maya (Jessica Chastain) leads the charge.  While clues and leads to bin Laden's whereabouts are scant, and while lives are lost along the way, the search eventually leads to the compound in Pakistan where the elusive terrorist leader is shot and killed by the Navy S.E.A.L. Team 6.

Much has been made about the torture sequences that comprise the first half-hour.  Senator Dianne Feinstein and others recently criticized the film for falsely suggesting that torture was successfully used to gain information on bin Laden, when in fact no crucial information was gleaned from such tactics.  For what seems like forever, an al-Qaeda suspect is waterboarded, denied food and water, forced to stand for hours on end, and subjected to sleep deprivation.  The waterboarding sequences are the most harrowing; sometimes I forgot to breathe as I saw the towel smothered over his mouth and water poured on it.  It was agonizing watching this man being forced to stand for hours upon hours upon hours. In the movie version, eventually, he gives the agents a lead.  A small one, but one that will someday take down bin Laden.

Bigelow's and cinematographer Greig Fraser’s compositions and camera movements mimic that of a documentary.  Rarely, if ever, is the camera stationery.  The handheld shots are noticeable for a while, but not bothersome.  Bigelow and Fraser typically place the camera at a higher than average camera height, with numerous medium shots and medium close-ups.  When mixed with wide and extreme wide shots, a rhythmic dynamism in key scenes.  Two of the most prominent such scenes take place in a restaurant that is bombed and a suicide bombing in Afghanistan.  In the former, the camera distance causes complacency and relaxedness prior to the bombing.  In the latter, the compositions fan the tension and wariness that precedes the attack

The third visual key to Zero Dark Thirty's success is William Goldenberg’s and Dylan Tichenor’s editing.  Thanks to the performances, compositions, and camera movements, combined with the editors’ knack for impeccable timing, each cut his hard like a shot from a cannonball.  Consequently, it left me fully engaged even during seemingly routine stretches of dialogue-driven scenes.

I will never forget that May evening when I learned through Twitter about bin Laden’s killing.  I remember tweets that boldly declared President Barack Obama the winner of the 2012 election.  Zero Dark Thirty was originally slated for an October release, but political pressure from Obama opponents - who feared the film would unfairly influence the outcome of the election - led Columbia Pictures to shelve it for a Los Angeles opening on December 19, and wide release today.

It wasn’t just Obama's reelection, and the subsequent cooling-off period, that rendered these concerns moot.  Zero Dark Thirty is apolitical.  It's neither pro-Bush nor anti-Bush, nor is it pro-Obama or anti-Obama, nor is it even pro-Democrat or pro-Republican.  It has no agenda other than to show how Osama bin Laden - the man responsible for the senseless deaths of almost 3,000 innocent Americans on September 11, 2001 - was tracked down and killed.

For those who have issues with the film's factual inaccuracies, this is not a documentary.  Just like any adaptation of any story, whether it is based on fiction or a real-life incident, there will inevitably be some artistic license.  Maybe these people should follow renowned French film critic and director Jean-Luc Godard’s advice about criticizing a movie by making another and shoot a documentary about it.  But for now, we have Zero Dark Thirty, the best film to come out of Hollywood in 2012.