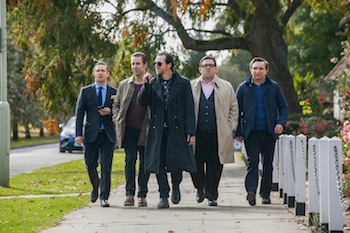 Wright tackles the apocalypse once again with The World’s End.  It stars Simon Pegg as an immature fortysomething slacker named Gary King, whose attempts to bring back the halcyon days of his youth are met with derision and frustration by his high school friends Peter (Eddie Marsan), Oliver (Martin Freeman), Steven (Paddy Considine), and Andrew (Nick Frost).  He contrives to get the pack to the small town where they grew up for a second bid at drinking pints from twelve neighborhood pubs in one night, the The World’s End.  As the jovial Gary and his reluctant friends traverse one pub to the next, they notice the pubs that were once individually unique now look exactly the same, as if they were taken over by a corporation, and the townspeople are emotionless and not exactly welcoming.  It takes a while for the guys to realize a sinister plot is at work, but Gary insists they finish what they started over twenty years ago…even if it literally kills them.

If you’ve seen the ads and trailers, you know that the townspeople are robots.  Wright and co-writer Pegg don’t arrive at this plot point until roughly the second half.  The preceding sequences take however much time the filmmakers need to flesh out the characters, the sleepy town, and the eerie sense that something isn’t right.

Those waiting impatiently for the action will miss out on the dry, sophisticated humor imbedded into the film.  Three layers of it exist:  the contrast between Gary and his respectable, more grown up friends; the dialogue; and the rhythm of each joke and gag.  Gary’s friends’ exasperation – subtly evidenced by their facial expressions and body language – exemplifies the first.  One of the many funny exchanges I noticed is indicative of how offbeat the humor is:  Andrew:  “I haven’t had a drink in 16 years.”  Gary (oblivious and dense):  “You must be thirsty then!”  The rhythm of the humor is dictated by what I can only describe as “stop and go.”  Basically, Wright begins a joke and then abruptly cuts to the next scene.  The sudden cut punctuates the punchline the same way a writer ends a sentence with an exclamation point.

The fighting is a masterwork of action and both comedic and cinematographic timing.  The robots don’t punch but grab faces.  I found it funny because of how the guys kept trying to punch them, but had to fend off in frustration the grabbing.  In another sequence, one robot, whose arms are torn off, puts another’s legs in her shoulder sockets.  The visual gag of seeing legs as arms is funny enough.  Spinning them at 360 degrees takes it to a higher level of funny.

Each of these sequences are assembled in long takes, preserving the slightly jerky, but otherwise fluid camera movement and blocking.  Every take could not have been more perfectly timed, and the camera could not have been placed at a better distance.

There will be those reading this review that will say I’m overthinking it, especially since The World’s End is a comedy.  The thing is, it’s not the average funny comedy mainstream American audiences are used to seeing from Hollywood.  This film, and Shaun of the Dead and Scott Pilgrim, demand a higher level of appreciation and thinking in order to be fully appreciated.

I don’t talk about the camera movement, the screenplay, and other technical stuff for analysis.  Assuming you’re reading this before you see the movie, it’s my hope that this review will guide you towards elements that can be easily overlooked, and inform you of what to expect.

The only major flaw is how the filmmakers end the movie.  The ending features a twist that is totally unexpected and unnecessarily out there.  After everything that was set up, it’s somewhat of a letdown.  Screenwriting “guru” Syd Field and many other “experts” always talk about how the first ten pages of a screenplay are the most important.  As The World’s End demonstrates, the last ten pages are equally important.

The World’s End is now playing in wide release.