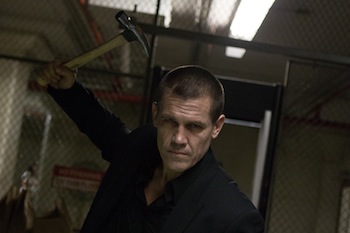 Which is why I can’t talk too much about the plot beyond the basics.  Joe is an unlikable alcoholic ad executive.  He’s divorced with a 3-year-old daughter.  He shows little apparent interest in his daughter’s life, choosing to take a client and his wife out for dinner rather than go to her birthday party.  After making a miserable failure of a sexual advance towards the client’s young wife (and getting his ass handed to him) he drinks heavily, is kidnapped, and held for twenty years in solitary confinement.  His wife is raped and murdered shortly after his imprisonment, and he’s framed for the crime.  He’s suddenly released, and meets a troubled young woman (Elizabeth Olsen), who helps him in his quest for vengeance…but first he must figure out exactly whom it is he seeks vengeance against.

The screenplay, as previously mentioned, is full of secrets.  Protosevich tells the story on his own terms, always careful in choosing when to reveal key information and, most importantly, how much.  One movie with a similar sense of craft is George Sluizer’s The Vanishing (1988).  Not the American remake with Kiefer Sutherland and Jeff Bridges – the original unhappy, but appropriate ending was replaced, by Sluizer himself, with an awful upbeat one – but the Danish version.  The Vanishing, like Oldboy, was also diabolically plotted, with the final, and most powerful, revelation occurring in the second to last scene.

Protosevich’s script does a commendable job squeezing in twenty years of mentally tortuous isolation into an approximately fifteen minute sequence.  Oldboy begins in the year 1993, as seen on the news; the television in Joe’s room is his only connection to the outside world.  As he can only watch helplessly, he witnesses from a physical and emotional distance the re-election of Bill Clinton; Clinton’s impeachment; the ringing in of the new millennium; the September 11 attacks on the World Trade Center; the War in Iraq; and the election of America’s first black President. (I’m certain I’ve left a few things out, but I think you get the idea.)  The montage is sobering, as a lot can happen in 20 years.  There’s probably few worse feelings in the world than being unable to participate.

Protosevich doesn’t make it easy to feel sympathy for Joe, however.  He is a despicable man, a characteristic of which Brolin has found his niche in the last few years, playing Harvey Milk’s assassin five years ago and killer Tom Chaney in True Grit (2010).  He combines the best elements of both characters – the cowardice and hatefulness of Dan White and the meanness and grit of Chaney – with the addition of elevated abrasiveness.

When Joe is released, he’s a different, but not necessarily better, man.  While he’s no longer abrasive, and even though he’s genuinely remorseful for his past misdeeds, he’s now as icy cold as the streets of New York in winter.  He’s truly disconnected with the world.  The World Wide Web just barely came into existence in 1993.  In one clever scene that provides a teeny tiny bit of levity, he is amazed at how you can type anything into Google and it will give you virtually any information you ask for.  It’s fleeting, but it sure does remind today’s web-dependent people take the Internet for granted.  Similar scenes are sprinkled periodically throughout.

Sean Bobbitt’s (12 Years a Slave, Byzantium) photography is suitably dark and grim.  Joe’s cell has no windows, and is lit with creepy and uninviting lighting, shadows, and colors that are as comfortable as an Overlook Hotel suite.  Nighttime sequences are so harshly black, and have such spotty lighting, that it would make any reasonable person afraid to walk the streets alone.

As far as the violence is concerned, I’ve seen a lot more gruesome and intense.  It’s hardly shocking, except in a torture scene where Joe cuts inch by inch the throat of Chaney (Samuel L. Jackson) with the intent to pull his head off.  When Chaney is unwilling to cooperate, he pours salt on the wounds.  The close-ups and extreme close-ups of the cutting and salt-pouring amplify the intensity, elevating them from easily dismissible to in your face.

There is an old proverb that goes “revenge is a dish best served cold.”  There’s plenty of it dished out in Oldboy, and just in time for Thanksgiving, too!

Brian Lafferty is an award-winning film critic and assistant editor currently living in San Diego.  He graduated with a B.A. in Radio-TV-Film from California State University, Fullerton.  In 2013, he won a San Diego Press Club Award for his film criticism, taking third place for his review of Before Midnight.  He welcomes letters at brian@eastcountymagazine.org.  You can also follow him on Twitter: @BrianLaff.