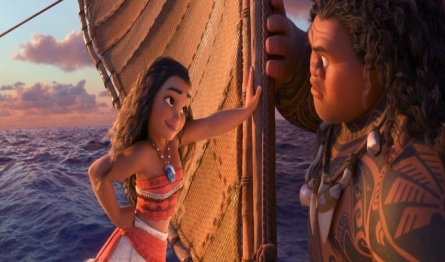 November 21, 2016 (San Diego) - I, like most little girls in the 90s, ate, slept and breathed Disney movies.  I was never a princess for Halloween--I was too tomboyish for that--but Belle was my favorite Disney princess and Beauty and the Beast was my favorite Disney movie.  I watched it all the time.  That and Toy Story.  That honor eventually went to 101 Dalmatians (seriously, I was obsessed with that movie.  I played the computer game all the time too).  Tonight I had the privilege of reliving my childhood as an almost 25-year-old.  I attended a pre-screening of the new Disney film Moana, directed by Ron Clements, Don Hall, John Musker and Chris Williams.

Don't let the all-male director cast fool you; Moana does a superb job at targeting girls.  Moana is about a teenage Hawaiian (or ancient Hawaiian) girl, named after the film’s title and played by Auli'i Cravalho, who is chosen by the ocean as a little girl to restore good fortune to her island, inhabited by people who were once voyagers.  However, her father wants her to become the new chief after he passes.  But she is encouraged by her grandmother and as her grandmother lays dying, she finds the courage to find a boat, set out on her own to find Maui (Dwayne "The Rock" Johnson), an egotistical demigod who takes advice from his many tattoos and who has lost his magical fish hook, which allows him to shapeshift.  Maui stole a glowing green stone a thousand years ago that cursed Moana’s island.  Moana finds the stone as a little girl on the beach.  On her journey, Moana meets Maui.  The two don't get along at first and Maui treats Moana like she's clueless, but they eventually become friends and Maui helps Moana defeat monsters and save her island.

Let's get what I didn't like about the film out of the way first:  the music.  I did NOT like the music.  I thought it was going to be more like Lilo & Stitch where it was traditional Hawaiian music.  There was some of that, but all in all, the film turned out to be a musical with the characters singing.  I liked the character’s voices, I just didn't like the rhythm of the songs.  A word of advice:  if you ever encounter a crab with horrible teeth singing smooth jazz, RUN.

A critical factor this film had was teaching young girls that it's okay to do things on your own, but it's also okay to have anyone's--especially a man’s--help.  In the film, Moana and Maui have to defeat a lava monster.  Moana thinks they can maneuver around it somehow, but Maui tries to get her to do things his way.  The monster ends up defeating them, pushing them and their boat out to the open sea and cracking Maui’s hook. Maui then tells Moana the awful truth; that the ocean chose wrong and she isn't the chosen one.  He then leaves.  Moana gets paid a visit from her grandmother from beyond.  She reminds her who she really is; the savior of her people.  Moana pulls herself up by her bootstraps and uses what she learned about sailing from Maui and faces the lava monster a second time.  Maui arrives and, not caring that one more hit could destroy his hook, helps Moana defeat the lava monster.  I think that's a powerful message to send to young girls; feminism will tell you that you as a woman need to prove you're just as capable as a man and that you need to do everything a man does.  While that's true, the message this film stresses is that it's okay to ask for help.  We can't do everything by ourselves.  We aren't superheroes.  And in a way, this film wasn't just about Moana finding herself; it was about Maui finding himself too.  Moana helps him to do that by saying that the hook doesn't make him a powerful demigod; he does.  That's another message the film stresses to young women; it's okay to follow a traditional role of caregiver and helper.

Basically, I liked the film because it tells girls and women that you can be whatever you want to be.  Of course, there's the standard Disney teachings, like trust, faith, hope, etc., but I think they were definitely aiming for the messages for girls and young women specifically.

There were some tear-jerkers.  I cried when Moana saw her grandmother appear to her.  I also cried when Moana's mother tells her that sometimes, who we want to be just isn't who we're meant to be.

There were some funny moments.  A running gag in the film was a seemingly mentally ill chicken who travels with Moana and Maui who has no clue where his food is and keeps getting hurt, but he does have some uses, such as saving the stone from falling from Moana's grasp during a rough patch of waves.

All in all, Moana is inspirational to girls and women and a good film for the family.  There were a lot of kids in the theater I was at and they all seemed to enjoy this film.