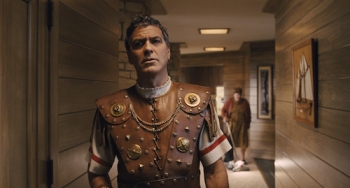 February 5, 2016 (San Diego) – Hail, Caesar! (Ethan Coen and Joel Coen, 2016) falls under a category I like to call a “Love Letter Movie.” Defining the term is hard. However, I can easily point to a classic example, Ferris Bueller’s Day Off (John Hughes, 1986), which was the beloved director’s love letter to Chicago. It showcased Wrigley Field, the Art Institute of Chicago, the Von Steuben Day parade, and Chicago’s other fine attractions with affection and pride. Hail, Caesar! is the Coens’ love letter to classic Hollywood in much the same way.

Josh Brolin leads the all-star cast as Hollywood “fixer” Eddie Mannix. As head of physical production at the fictitious Capitol Pictures, his main job is to make potential scandals disappear and preserve his stars’ squeaky-clean appearances. Over the course of one day, he deals with the kidnapping of hugely popular star Baird Whitley (George Clooney) by disgruntled screenwriters turned avowed Communists; pregnant actress DeeAnna Moran (Scarlett Johansson) who happens to be unwed (which is anathema if the year is 1951); and hopelessly typecast singing cowboy actor Hobie Doyle (Alden Ehrenreich) struggling with a more sophisticated role much to the frustration of a classically trained director (Ralph Fiennes). While contending with this craziness, Mannix spends his precious free time trying to keep nosy gossip columnist Thora Thacker (Tilda Swinton) and her identical twin sister Thessaly (Swinton) away.

The Coens’ love for classic Hollywood is strongly felt and deeply reflected in every scene. The movie is chock full of references, tributes, and spoofs, but the Coens make everything their own. I found the Busby Berkeley-inspired dance number most indicative of this. This sequence begins underwater with showgirls diving into a large pool in a smooth rhythm, followed by Moran – as a mermaid – swimming toward the foreground. It then cuts to a shot directly above the pool, facing down. There, viewers are treated to an elaborately choreographed set of dances, the showgirls forming kaleidoscopic patterns not unlike those seen in Footlight Parade (Lloyd Bacon, 1933).

The other films-within-the-film run the gamut of popular genres of the time. The singing cowboy western is parodied in the Coens' inimitable style, blending silly songs not dissimilar to ones heard in Gene Autry films with visual references to more serious fare like Shane (George Stevens, 1953), plus stunt work involving horses, trees, and acrobatics. Of course, the good guy's horse is white and the bad guy's is black.

The Coens also send up the epic with a subplot about a troubled production of a movie similar to Quo Vadis (Mervyn LeRoy, 1951) and Ben-Hur (William Wyler, 1959). The overwhelmingly lavish production design and the need to meet the approval of all religious denominations are satirically explored.

The Coens go so deep that it at times acts as a time capsule of a different era of filmmaking. Every set appears as genuine as it would have been without a green or blue screen. If anything was added digitally in postproduction, the technicians did a remarkable job blending them with the physical sets.

Hail, Caesar! was photographed on film by the esteemed Roger Deakins, the Coens' go-to cinematographer since previous collaborator Barry Sonnenfeld ventured into directing after Miller's Crossing (Joel Coen and Ethan Coen, 1990). I specifically mention the format because unlike digital video, the unique combination of grain and the movie’s unique color palette rigidly maintains the look associated with color movies of the era. I found one particular throwback both amusing and nostalgic, the old fashioned "day for night" filtered look, with the moonlight shining as bright as sunlight upon the ocean.

Figuring out the references and tributes is a fun little game if your knowledge of movie history extends well before Jaws (Steven Spielberg, 1975) and Star Wars: A New Hope (George Lucas, 1977). Everyone else will get a laugh out loud funny film with the usual offbeat humor the Coens specialize in, and there's nothing wrong with that. They just won't know what they're missing.