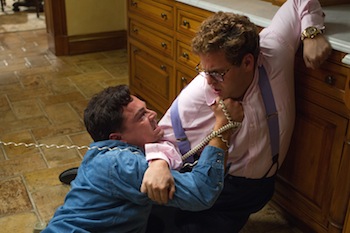 Leonardo DiCaprio, director Scorsese’s go-to actor for the last ten years, turns in one of his best performances of his career as young stockbroker Jordan Belfort, who picks the worst time to get into the business:  Black Monday, October 1987.  With the market for stockbrokers dried up, Belfort must settle for a job selling penny stocks at a small Long Island office.  There, he impresses the uninspired staff with his aggressive sales tactics.  Donnie Azoff (Jonah Hill) takes a liking to him, and they subsequently form a company that defrauds many investors in a massive securities scheme.  Belfort dumps his wife (Cristin Milioti) to marry lusty blonde Naomi (Margot Robbie).  When they aren’t having sex, Belfort snorts, pops pills, and engages in raunchy intercourse with other women while enlisting a Swiss banker’s (Jean Dujardin) help in hiding his massive amounts of ill-gotten money.  Looking to bring down his empire of greed is FBI Agent Patrick Denham (Kyle Chandler).

For 20 years, I’ve waited patiently for DiCaprio to give the same magnificent performance as Arnie in What’s Eating Gilbert Grape.  For a while after that phenomenal Oscar-nominated performance, he was relegated to teen idol roles (William Shakespeare’s Romeo + Juliet, Titanic).  In 2002, Scorsese cast him in Gangs of New York, and since then he’s starred in a string of impressive movies.  As good as he was as the weird and enigmatic Howard Hughes (The Aviator) and the haunted Teddy Daniels (Shutter Island), for the longest time he’s been more charismatic and good looking than a great actor.  His roles and performances are so alike that if they were a housing development, they would resemble those “Little Boxes” folk singer and activist Pete Seeger sang about in the early sixties, except they would be made out of marble, not ticky-tacky.

DiCaprio finally does it again with a rare and long-awaited all-around performance.  He has so much fun with his character that the resultant energy becomes infectious, which translates into a positive domino effect on the rest of the cast that never lets up.  He’s at his funniest since playing Frank Abagnale Jr. in Steven Spielberg’s light-hearted Catch Me If You Can (2002).  His timing as he speaks every funny line, his body language as his character ingests every drug, and his body language as he has sex with every woman couldn’t be any more spot-on.  The more serious moments, such as when he attempts to kidnap his little girl after Naomi announces she’s divorcing him and seeking full custody, are as unforgettably solemn as his funny scenes are riotous.

Roger Ebert’s edict in his brilliant Exit to Eden review – that sex in movies is only funny when taken seriously – holds true.  The sex ranges from crude to sexy, but are funny because they are taken seriously by the actors, screenwriter Terence Winter, and Scorsese.  One of the funniest scenes involves Naomi, wearing no undergarments, sexually teasing her husband, only to learn to her horror about the teddy bear placed on the bookshelf.  It sounds juvenile, but trust me when I say that Scorsese transforms it from a tired scene that would be commonplace in an immature teenage sex comedy to something adult, sophisticated, and classy.

The Wolf of Wall Street is marked by a frenetic energy not unlike that seen in Goodfellas (1990) and Casino (1995).  Scorsese, known for his constantly moving camera a la Jean Renoir (Grand Illusion) and Max Ophüls (La Ronde), works with cinematographer Rodrigo Prieto (Argo) to construct an endless series of intricate camera movements that supply plenty of pep.  Scorsese’s and Prieto’s strong sense of space, movement, and direction, combined with editor Thelma Schoonmaker’s equally strong sense of tempo and rhythm, sustain this energy for the entire three hours.

This culminates in the funniest scene, which takes place later in the film, when Belfort and Azoff feel the effects of a long-outlawed drug that makes them look like they have cerebral palsy.  In the funniest joke related to mental retardation since Tropic Thunder, DiCaprio goes all out with slurred speech, drool flying out of his mouth, and crawling around on all fours like a drunk dog.  This scene goes on for at least five minutes – a risky length of time for a single joke – but because of the performances of the actors, who have such incredible timing for a scene that could easily go south in a hurry, and the energy of the camera movements and cutting, it’s funny to the very end.

The Wolf of Wall Street stands tall in a year of many great films, the best year this decade.  It easily draws comparisons to Goodfellas and Casino in terms of style and screenplay (especially the Henry Hill-style narration).  It’s difficult, however, to draw any unfavorable comparisons.  It only took into the last week of the year, but I can now say with absolute certainty which movie is 2013’s best.

The Wolf of Wall Street is now playing in wide release.