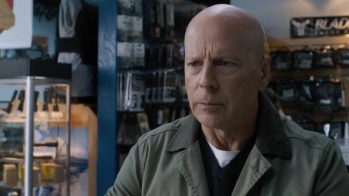 March 2, 2018 (San Diego) - I’ve never paid attention to Bruce Willis.  Not since it became a meme to list Die Hard as a Christmas movie (over The Thin Man?  Really?  Die Hard has Christmas in one scene, whereas The Thin Man has Christmas throughout the movie.  Besides, who doesn’t love William Powell’s effortless trolling and drinking?), I’ve semi-boycotted Bruce Willis.  It’s been a while since I willingly watched one of his films. Heck, it’s been a while since I willingly cared about him.  And so it was with slight unease that I walked into the theater for his latest film, Death Wish.  Boy, was I wrong to be nervous.

As with 99 percent of what Hollywood churns out these days, this is a remake of a 1974 film in a which a man becomes a killer to avenge his murdered wife. But this one is a lot better.

A doctor (Bruce Willis) is living life normally with a daughter headed off to college when one night changes everything.  Thieves break into his home and murder his wife and put his daugher into a coma.  Out to avenge his wife’s death, he becomes “The Grim Reaper,” a hoodie-wearing vigilante who beats up on the hoodlums of Chicago.

If that gives you a Tobey Maguire Spider-Man vibe, don’t worry; I got the same impression.  Especially during the montage where Dr. Kersey is watching videos on how to load a gun (conveniently set to ACDC’s “Back in Black,” of course).  I thought he was going to whip out the makeshift Spider-Man costume that Peter Parker makes before he gets his real suit.

The rising incident is supremely well-done; a mother and daughter alone in the house while robbers wait for them.  If you watched this past season of American Horror Story, it definitely had that feeling.

“The Grim Reaper” is almost a Zorro-like character, striking by night.  Whereas Zorro defends priests and natives from the Spanish nobles and wears all black, a cape and a mask, the Grim Reaper defends children and women from Chicago’s many criminals and wears a hoodie and jeans.  He’s the talk of every radio show and he’s all over social media.  He eventually finds the criminals who killed his wife and brings them to justice.  AKA murdering them.  So they can’t spend the rest of their lives rotting in prison.  S-M-R-T.

The only bad thing about this movie is that after the opening scene, Don’t Worry Baby by the Beach Boys plays.  I love the Beach Boys, but I’m not sure they fit in after a Grey’s Anatomy-esque hospital scene.  And...I don’t know, maybe it’s just me, maybe it’s just because I’m a woman or whatever, but I’d be bawling my eyes out if I found out my wife and child were injured or killed.  Stunned, yes, but I’d be crying.  Not staring into space like Willis was.

Death Wish is gripping, fun and a wild ride and great slice of Chicago action.  Oh and also, here’s a piece of dialogue to convince you to see it…

“Are you the ice cream man?”