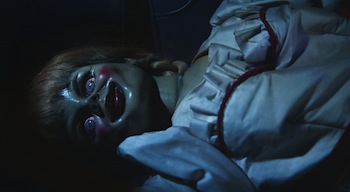 October 10, 2014 (San Diego) – When I wasn't covering my eyes, holding my breath, and jumping in my seat, I laughed inside and thought sarcastically, "I know Uncle John would just love Annabelle." My Uncle John lives with my 99 year-old grandmother, who has collected many things over the years, including a doll that gives him and most of my family the creeps. It's an old-school baby doll that looks, feels, and weighs the same as a real baby. When you walk past it, you get the feeling it's watching you. And my grandmother insists on having it in her living room.

Annabelle centers on a young expectant couple, Mia (Annabelle Wallis) and John (Ward Horton), living the typical happy suburban life. Their idyllic lives are shattered when their next-door neighbors are gruesomely murdered at the hands of their estranged daughter and her boyfriend, members of a satanic cult, who then invade their home. The boyfriend is shot to death by police while the daughter commits ritualistic suicide, clutching a doll gifted to Mia by John.

Strange things then start happening. It begins with the sewing machine turning on by itself. Then the house burns down. Soon after, Mia experiences scary supernatural phenomena. Clearly, these horrific events are attributed to the doll, but screenwriter Gary Dauberman bides his time in dishing out how and why, making things a bit more terrifying.

Just looking at the doll gave me the creeps. It looks like an American Girl doll manufactured from a factory in the depths of Hell. It's as tall as a three year old. It has a cherubic face with bug eyes and big fat smiling lips smothered with maroon. And that's before it's possessed. Thereafter, with each passing shot, its closed-lip grin morphs into a wide diabolical smile.

Unlike the Chucky doll in Child's Play (Tom Holland, 1988) Annabelle doesn't move on screen. I kept waiting for the horror movie doll clichés - head turning, walking, the usual - that prove the obvious, but the doll remained stationary. Because it doesn't move on screen, the differences in positioning from shot to shot as a result of its off-screen movements are chillingly pronounced. It also heightens the already strong sense of being watched.

Annabelle isn't entirely cliché-free. Joseph Bishara’s discordant score squeals and pounds away. It's a score that's as expected for a horror movie like this as the song Fortunate Son is for Vietnam films. Bishara goes the obvious route and gleefully runs a marathon with it.

Other clichés involve threatening characters walking slowly in the background Michael Myers style while the unwitting terrified heroes stand In the foreground. Evil beings suddenly appear in frame. Other times they’re seen deep in the background, but act and move unpredictably to the point where covering the eyes feels necessary.

Even so, no matter how many times you've encountered these sorts of things, and no matter how much you think you're prepared, very little can prepare you for them. Yes, they're clichés, but they work because they’re perfectly executed. It’s all about the timing and how they’re shot.

Set in 1969 or the early 70's (based on news footage of Charles Manson and the moral panic following his cult’s slaughter of Sharon Tate and the LaBiancas), the art direction and color palette boast the lesser-intense garish colors and styles of the period. It's the camera distance that sticks out, though. James Kniest, Director of Photography for only his second feature (and first in 18 years), favors medium to wide shots with piercing deep focus. The latter enables the movie's scariest moments to flourish. Prominent among them is the scene where Mia sees a vision of little girl the size and height of the doll standing in the room across the hallway from her. The girl starts running and when she crosses Mia's room, she suddenly morphs into the adult Annabelle who briefly attacks her.

You could have told me every bit of detail about this scene beforehand, but it still wouldn't have prepared me for it. It's all thanks to the deep focus and camera distance. The camera is far enough away that you can’t see the girl in much detail. When she runs, it takes a few seconds because the distance is a few meters or so away, but it’s enough to spring on the audience a nasty jolt of a payoff.

Annabelle is the latest jump scare film in the tradition of Insidious (James Wan, 2011) and The Conjuring (Wan, 2013). This isn't surprising once you view director John R. Leonetti's latest credits: he served as cinematographer for both films plus Insidious: Chapter 2 (Wan, 2013) and the TV series Sleepy Hollow and the ill-fated The River. His collaborations with Wan have certainly influenced his directorial work on Annabelle. This is not the type of film to watch if you have to walk alone outside at night afterward.