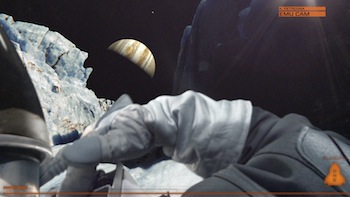 August 8, 2013 (San Diego) – Every time I think about Europa Report, I can’t help but think of Elton John’s hit song, Rocket Man.  It tells about an astronaut who leaves his family for a lengthy and lonely trip to Mars.  The lyrics beautifully describe the feelings of isolation ("It's lonely out in space"), longing ("I miss the Earth so much, I miss my wife"), and career crossroads ("All this science, I don't understand, it's just my job five days a week.")

Though written and released over forty years ago, it could easily describe the astronauts in Europa Report.  Sent to Europa, an ice-covered moon orbiting Jupiter, in search of life, the mission goes horribly wrong.  First all communication with ground control is lost.  A series of freak accidents wreak havoc on the isolated crew as these brave men and women perish one by one.  And what are those strange lights emanating from below the icy surface?

Director Sebastián Cordero and writer Philip Gelatt implement a captivating documentary style that weaves news footage and interviews with the found footage gleaned from the shuttle's cameras.  The rhythm and atmosphere is lyrical, although I’m not sure this was intended; Cordero and cinematographer Enrique Chediak do with the camera only what is needed, nothing more.  The lyricism arises from the images themselves, which are stunning on their own.  The shuttle's interior is as gray as a San Diego June Gloom.  Chediak and production designer Eugenio Caballero employ wide angle lenses and big sets to increase the agony of isolation; by making the sets large, the emotional distance is reflected in the physical distance.  On Europa's surface, the dark blue is piercing against the white ice and the pitch-black sky.  As the camera weaves through the water beneath the ice surface, the images are hypnotic and dreamy.

Buried underneath all of that, however, is enough tension and suspense to undermine any sense of comfort.  I wasn't on the edge of my seat, but I wasn't sitting back and relaxed, either.

The acting is straightforward.  No matter what tragic event befalls the crew, the dramatics are heightened only to a small degree.  Even Sharlto Copley, known for playing crazy characters (District 9 and The A-Team), is more or less serious in his interpretation of his character.

The performances are, for lack of a better word, appropriate.  It's a long, long way to Europa; at least 20-22 months according to the movie.  And that's one way.  The total round trip is almost four years of isolation.  Four years away from earth.  Four years of them doing nothing but riding in a space shuttle while their kids grow older, relatives pass away, and who knows what else they're missing.  Although they talk little about their feelings, these feelings of isolation and longing are deeply felt on several levels every time they speak, move about, and die.

The biggest surprise for me was Dan Fogler.  Two years ago I made plain my distaste for his unwatchable overacting in Take Me Home Tonight.  So when I saw his name in the credits, I was shocked.  I was even more shocked to see how eloquent and convincing he was the minute he started speaking.  Look, it's not a great performance.  The chances are high that I will not remember much of it – or much of Europa Report, for that matter – a year from now.  In any case, he’s proven to me that he can act provided he has a good director and script.

Once the shuttle reaches Europa, Gelatt reaches into the "And Then There Were None" bag.  I figured he would kill off as many of these characters as he could.  To say I don't like narratives like this would be too broad a generalization; after all, screenwriter Dan O’Bannon utilized this technique for Alien, one of cinema’s grandest achievements in science fiction.  If you're going to make a good film with it, the best things you can do are 1) create three-dimensional, fully developed, and compelling characters, and 2) make it a part of a larger story instead of the crux.

Europa Report is a satisfying and intellectually stimulating science fiction film.  In fact, it’s one of two films with that distinction to be released to San Diego theaters this week.  The other is Elysium, which coincidentally also stars Sharlto Copley, who was absent for the last three years, and now has two more films coming out later this year (one of them being Spike Lee’s Oldboy remake).  He certainly knows how to pick his projects.