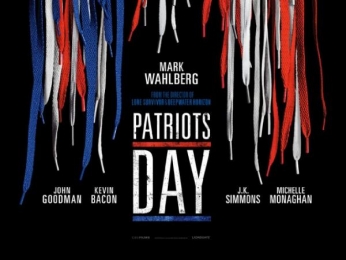 I still remember the watching first Boston Bruins game after the bombing.  During the anthems, the entire TD Garden was silent.  Rene Rancourt began to sing and after "were so gallantly streaming," he stopped.  The crowd took it from there.  They carried Boston Strong flags as the American flag danced on the ice and on the junbotron.  I'm from New Hampshire, but I've spent a lot of my life in Boston and I call it my city too and I've never been more proud of my city than I have in that moment.

To this day, four years later, my cousin, who lives in Merrimac, Massachusetts, says she’s afraid to go into Boston.  Not to take her son to a Red Sox game or anything.  Her story and so many others are why I feel it was an excellent idea for Mark Wahlberg (a Boston native) to put this event on film.

The film does exactly what its synopsis says; it highlights the events of April 15, 2013, the day of the Boston Marathon bombing and the days that followed.  It also highlights the lives of some key players surrounding the events:  Boston police sergeant Tommy Saunders (Mark Wahlberg), Boston police commissioner Ed Davis (John Goodman), Dzokhar and Tamerlan Tsarnaev (Alex Wolff and Themo Melikidze, respectively), Watertown police sergeant Jeffrey Pugliese (J.K. Simmons) and FBI Special Agent Richard Deslauriers (Kevin Bacon).  It also shows the suffering of a few of the most important victims:  Patrick Downes and Jessica Kensky (Patrick O’Shea and Rachel Brosnahan), who are shown during the leg amputation process (Patrick only had one leg amputated; Jessica had both).

From the beginning, I was identifying with everything in the film, from Dunkin Donuts to Tommy’s Patriots pillow (I don't have a Patriots pillow, but I have Pats pajama pants and a shirt and other merchandise.  Seriously, you should see my apartment.  You'd think you left California and had been transported to Boston) to the Boston accents.  I loved hearing the Boston accents.  It made me feel like I was home.

What I really liked about this film was that, unlike The Untouchables where the story was centered on Eliot Ness and his family and no one else, this film actually shows the lives of not only Tommy and his wife (played by Michelle Monaghan), but it shows the everyday lives of Patrick and Jessica, Sgt. Pugliese and others.  And when I say everyday, I mean the night before the bombing, of course.  That leads me to my next point.  The film does a great job of showing that all of these people, even Tommy, were just living their lives normally the night before, working, eating dinner, etc.  They had no clue that this was about to happen the next day.  It even shows the Tsarnaevs playing with Tamerlan and Katherine Russell's (Melissa Benoist) daughter as if Dzokhar and Tamerlan weren't about to become terrorists and were just a normal family.

As impactful as this film was, I didn't cry until the very end.  After the first Red Sox game back, the film ends and a series of interviews with the actual survivors and police officers, not the actors, follows.  Even former Massachusetts governor Deval Patrick spoke.  I started to cry when Patrick talked about how he ran in the marathon with his amputated legs.  Next came a section where photos of the deceased were shown and when eight-year-old Martin Richard's (who was a gigantic Bruins fan) photo came up, I cried.  I just couldn't think of what kind of monster could kill an eight-year-old boy.

There was two things I didn't like.  One was that some characters, I felt were irrelevant, such as Dun Meng (Jimmy O. Yang), the MIT officer, Sean Collier (Jake Picking).  I didn't think they had any real relevance.  Dun Meng gains some relevance when he ends up being the person that tips off the police where the Tsarnaev brothers are after they carjack him and steal his wallet.  But I don't really think Collier had any relevance other than being an officer that the brothers killed.

The other thing I didn't like is a small, nitpicky thing, but even at the climax of the film when all the officers are converging on Tsarnaev in Watertown, Pugliese doesn't panic and isn't fazed.  I suppose that's what you have to be as a police officer in that situation and those are the types of characters that J.K. Simmons plays, but I just wanted him to show some emotion.

I wanted to post some quotes from the film that the audience in the theatre (including myself), applauded, but sadly, they have profanity in them.

A fun thing to me as a Red Sox fan was that David Ortiz was at the end of this film!  I had to contain my excitement at seeing him, but I thought putting him in the film spoke to our city’s character and who we are.  I still get chills when I think about his speech at the first game at Fenway following the bombings.

So let us remember the words of Big Papi:  "This jersey that we wear today doesn't say Red Sox.  It says Boston."

The film will open in theatres everywhere on Friday.  Even if you're not from Boston or New England like me, you should still see this film as an American.  It will fill you with pride, something this country sorely needs more of from its citizens.