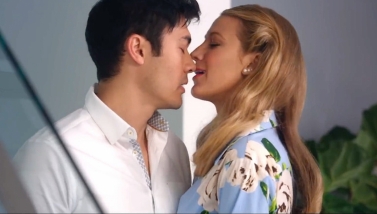 September 14, 2018 (San Diego) - If you love the Pitch Perfect series like me, you love Anna Kendrick.  But after three Pitch Perfect films, she’s ready to branch out and do other genres.  A Simple Favor is her first foray into a drama after making Pitch Perfect 3 last year.

I wish film reviews could only be one word because I only have one word for this film:  strange.

Stephanie (Kendrick) becomes best friends with a woman named Emily Nelson (Blake Lively from Gossip Girl fame).  It begins as a completely normal friendship at first, but soon, Emily turns up missing and eventually dead, or so everyone thinks. 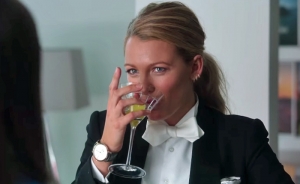 Stephanie does some serious detective work a la Megan King-Edmonds from Real Housewives of Orange County and discovers that Emily has a secret double life.  It turns out that her name isn’t Emily at all, but Faith McLanden.  It also turns out that she and her twin sister Hope wanted revenge on their father, so they burned the west wing of their family home in Michigan down.  Faith fled to New York, but reconnected with her sister 14 years later and drowns her because she felt betrayed.

Well of course, Emily turns out to be alive.  Her husband Sean (Henry Goulding from Crazy Rich Asians, a WAY better movie than this.  Seriously, he really downgraded) has no idea about this, of course.  She turns up and reveals to Stephanie all of the above, slightly abridged, of course.

The climax probably has Hitchcock turning in his grave.  Emily confronts Sean and Stephanie, who are obviously having an affair (can you blame him?  He thought he had the all-clear with his wife supposedly dead and all).  Stephanie, convinced Sean is behind everything, shoots him.  Emily shoots him next while confessing that she drowned her sister.  Unbeknownst to her, Stephanie is filming everything with a nanny cam hidden in her blouse button and Emily is put away for 20 years.

Where to start with this atrocity....first off, false advertising.  The previews I’ve been seeing make this look like a halfway decent psychological horror film, a la Psycho.  But watch the movie and it looks like they either tried too hard or not at all to replicate the Master of Suspense’s work, including the cringeworthy final scene which I think was trying to replicate the exposure scene at the end of Psycho?  You're led to believe that Sean and Stephanie plotted the whole thing together, but it isn't clear to what extent or how long.

Anna was this film’s only savior.  She still kept that nervous charm that made me love her in Pitch Perfect.  But at the same time, I feel like she was still trying to squeeze the comedy of PP into what should have been a serious, suspenseful Psycho-like film.  By the way, I’m not sure what purpose Stephanie’s (totally gay) friend serves other than stupid one-liners and hitting Emily with his car.

So, if you’re one of those weird people that likes funny murder-mysteries (kind of hypocritical of me since I laughed at The Happytime Murders, but oh well), see A Simple Favor.  If not, stay home.  The film opens today.

Although I really shouldn’t have expected much; the film is directed by Paul Feig, the man who absolutely destroyed the all-female Ghostbusters reboot.  Not that that should have existed in the first place.