March 13, 2018 (San Diego) - When I was a kid, my best friend had a PlayStation.  On that PlayStation, he had the original Tomb Raider game.  Gaming was simpler back then; feminists didn’t have to complain about the “sexualization of women” (there is none) in games because, you know, this was the 90s; women and men in video games were just...blocks (Goldeneye, anyone?).  So, I went to see Tomb Raider under the premise of nostalgia.

I’m used to Angelina Jolie playing Lara Croft, so I was interested to see how Alicia Vikander did.  And you know, women’s rights groups love complaining that Jolie’s Croft was sexualized.  I just watched the original recently and I saw no such thing.  Nor was there any sexualization with Vikander’s Croft.  Both are strong, brave, adventurous women, though I did find Vikander’s Croft a bit more human.  Jolie was a bit emotionless. 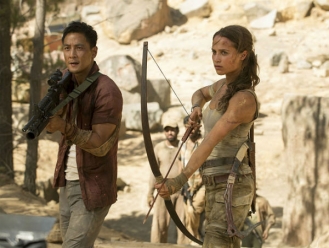 I was riding an action movie high after seeing Death Wish a few weeks ago and this film had plenty of it. For those unfamiliar with the Tomb Raider series, it’s basically the female version of Indiana Jones with a small difference:  Lara Croft literally does what the name says—raids tombs, while Indy focuses on finding artifacts.

The story starts off unexpectedly; Lara has a normal life; she boxes, has friends and problems just like a normal person.  It’s only when she finds a tape from her long-lost father, Richard Croft (Dominic West), telling her to destroy all of his work on the Himiko case.  Himiko was, in Japanese myth (or reality), a “death queen,” an evil sorceress in ancient Japan who was supposedly buried alive on a small island off of the coast of Japan.  Instead of doing what he asks, Lara sets out for Hong Kong where she meets Lu Ren (Daniel Wu), whose father was also killed by Mathias Vogel (Walton Goggins).  Except there’s one problem:  Lu’s father was actually killed.  Mathias lied to Lara, telling her he killed her father, but she finds him living as a hermit in a cave.  They reunite, are captured and are forced to open the tomb of Himiko.  They eventually find the shaman’s body after a series of perils and encounter even more perils after they unearth her, including the death of Lara’s father after he’s infected with her curse.  Lara defeats Mathias and returns to life in England.

I didn’t like the film’s “normal” approach at the beginning (making Croft a normal, everyday person); I thought it was going to open with Lara raiding tombs.  But the intro with Richard introducing the tale of Himiko was great because it reminded me exactly of the game.  The climax felt like I was playing on my friend’s PS1 with those blob characters again.

An issue with Vikander's Croft is that, although she does become braver and more confident throughout the film, she still retains that "uhhhh I'm a 20-something thrust into this weird environment with things that can kill me and I don't know what to dooooo helpppp" nervousness.  If you're thrust into a situation like Croft is, you better man/woman up quickly and gain some confidence, because you're going to need it.

Overall, however, Tomb Raider is fun and a great ride and if you’ve played the PS1 games, great nostalgia.  It’s released everywhere today.

Apart from this, there are different video games having their series with crystal dynamics, 3D background, graphics, and actions. You can play these games to experience the real world entities. These games are available in the online store of games. You can read the full info here about their terms and deals. I heard from my friend that they provide service with the best deals.
And for gaming enthusiasts - SHADOW OF THE TOMB RAIDER is scheduled to be released in the fall of this year. The last one was Rise Of The Tomb Raider. Excellent graphics and play story in all the Tomb Raider game series. Filled with action, puzzle solving, with heart pounding adventure, they are a must play for many gamers.