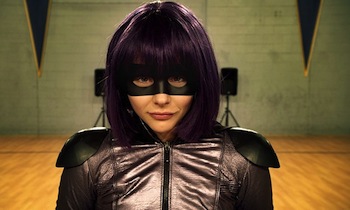 August 16, 2013 (San Diego) – Scattered throughout Kick-Ass 2 are the same high-caliber flashes of genius of its predecessor.  Only thing is Kick-Ass had a rich, fully developed screenplay by Jane Goldman and Matthew Vaughn from which to hang them.  Jeff Wadlow's screenplay is otherwise a messy concoction of underdeveloped subplots and gratuitous nasty violence.

In Kick-Ass, Dave's heroics became a viral sensation.  It has since inspired many everymen and women to become vigilante superheroes as well.  Mindy "Hit Girl" Macready (Chloe Grace Moretz) is now a freshman at Millard Fillmore High School.  Senior Dave "Kick-Ass" Lizewski (Aaron Taylor-Johnson) wants to team up with her, but her new father Detective Marcus Williams (Morris Chestnut) forbids her to engage in any superhero-related activities.  A dejected Kick-Ass joins a team of superheroes led by Colonel Stars and Stripes (Jim Carrey).  Chris D'Amico (Christopher Mintz-Plasse) is bitter over his father's death by bazooka at the hands of Kick-Ass.  With the help of his reluctant butler (John Leguizamo), he assembles a team of his own baddies in his quest for vengeance.

Marcus, trying to give his adopted daughter the childhood he felt her late father and his former partner Damon "Big Daddy" Macready (Nicolas Cage) robbed from her, forces Mindy to become friends with the so-called "cool girls."  This subplot reeks of high school clique clichés that Heathers brilliantly skewered back in 1989.  The only benefit gained from this awkwardly constructed story arc is the film's funniest sequence.  Mindy, upset over being ditched in the woods, makes each girl puke and empty their bowels all over each other with a little poke from a stick.

Other moments of genius include the fighting sequences, which number too few.  In the violent encounter to test Dave's fighting ability, he gets pummeled.  Hit Girl rescues him.  The sound designers and mixers pack these punches, kicks, and body slams at an unusually thunderous volume.  It reaches a high when Hit Girl slices the last and defiant thug's hand off.  I can still hear the splat.  Kick-Ass editor Eddie Hamilton returns here with a continuation of the same smooth cutting that permeated that film's fisticuff sequences.  The showdown at the end between the good guys and bad guys is a smorgasbord of acrobatic camera moves and funny death scenes.

That's not enough to save Kick-Ass 2 from the consequences of its misguided screenplay.  It's bad enough that Christopher Mintz-Plasse is the least convincing supervillain in the history of comic book adaptations.  Why did Wadlow feel the need to make him incompetent?  You do not make your protagonist smarter than the villain.  Mintz-Plasse’s character (whose name is so vulgar, it’s unprintable) doesn't know the first thing about robbing a store, the basics of fighting, the proper fertilizer to make fertilizer bombs, and leading a team.  Wadlow also makes a big mistake in making him deliberately trying to be evil.  But watch any good comic book movie, or any good movie for that matter, and you'll see that no good villain thinks he's evil.  Even the worst leaders in world history committed their atrocities because they thought they were doing their constituents a favor.

The film's worst offense, not counting a thoroughly distasteful attempt at a rape joke (screenwriters, please note: rape jokes are not, have never been, and never will be funny), is its inability to decide if wants to be a light-hearted comedy or a dark crime drama.  It's one thing if a comedy is funny, then gets serious towards the end when conflict reaches a head before everything is all better.  That’s normal.

But it's another to juxtapose humorous scenes with others such as a lovable character's gruesome death by sword through the heart and (offscreen) decapitation.  Or scenes like the one where the formidable Mother Russia (Olga Kurkulina) slays cop after cop, who are coming to the rescue of Night Bitch (Lindy Booth), the victim of attempted rape by D’Amico, who fails because he can't get an erection.

Is it any wonder now why Jim Carrey spoke out against the film earlier this year?  Kick-Ass 2 was developed and shot prior to the tragic events at Sandy Hook and the rampage of former police officer Christopher Dorner, who shot and killed several police offers.  I remember the morning I first heard about it.  I was downtown doing a paralegal internship when someone in the office was watching live news coverage.  The word was Dorner was in San Diego based on reports of eyewitnesses who said he hijacked a boat.  This guy had a violent beef against cops, law enforcement, and the criminal justice system.  I didn't want to leave the building.

Please don't tell me that it's only a movie, or that it was shot well before this happened.  Perhaps in another universe, this scene, and others, could have been written in a way that was funny and in good taste.  In this universe, they left an awful taste in my mouth.