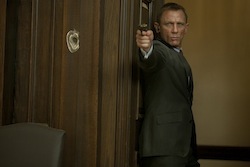 Another reason why I never watch trailers before a movie and why you shouldn’t, either: they show too much of the plot and spoil every twist.  If you did watch the trailer before seeing Skyfall, you would have been deprived of the pleasure of uncovering the mystery of who is the mastermind behind the bombing of MI6, the leaking of covert agents, and the attempts on M's (Judi Dench) life.

As I previously said, I estimate only ten-percent of the movie is action-oriented.  But that ten-percent of action is some of the most creative, unpredictable, and thrilling I've seen this year (and I don't, by the way, use superlatives unless I truly mean it).  I cite the opening motorcycle chase sequence as an example, a chase that starts on the ground, continues on rooftops, and then climaxes on the top of a train.  It all transpires so fast that one can't help but admire the screenwriters for not only keeping up, but penning some creative bits like Bond using a bulldozer as a shield from bullets, then using the claw to form a bridge to board the disconnected passenger car to catch up to the bad guy.

The other ninety-percent of Skyfall is unwinding.  It's during these intervals that the twist-laden story is developed, the characters fleshed out, and humor unleashed.  The wit is dryer than the Nevada desert.  I chuckled, I laughed, and I smiled at the endless stream of one-liners slyly and intricately weaved into the script by Neal Purvis, Robert Wade, and John Logan.

Daniel Craig plays James Bond at his weakest.  The bullet and fall he takes from the train during the opening sequence doesn't just affect him physically.  The failed recovery of the hard drive, and his sustained injuries, deals a huge deflating blow to his psyche.  Always the sharpshooter with his trusty Walter PPK, his hand trembles each time he aims.  His fighting skills leave much to be desired.  In the Komodo Dragon pit at the Macau lounge, he can't seem to do many things right.  The guy is big and strong, but then so was Oddjob in Goldfinger.  Ordinarily, this is where his keen intellect and sharp observation skills kick in, but he can’t think straight.  He only survives when the customized Walter PPK doesn't work for the henchman, who then falls prey to a hungry Komodo Dragon.  What would normally be a cheap screenwriting flaw is instead a statement of Bond’s vulnerability.

The lighting and color palette drive Skyfall's every aspect.  Cinematographer Roger Deakins colors key sequences in orange.  The orange in the Macau lounge is of the sultry, candlelight variety.  The cigarette smoke creates a noirish haze.  These alluring traits are amplified when Sévérine, this installment's “Doomed Bond Girl” (the second, lesser-recognized Bond Girl that is always killed off, usually by the midpoint) enters.  It makes her even sexier and seductive.  The action sequence at the end, which culminates in a firestorm in a mansion, is heavily dosed in a firestorm of orange that communicates intense rage and vengeance.

The ending is bittersweet and a sign of what’s to come.  Purvis, Wade, and Logan completely use Skyfall to rejuvenate the franchise.  They upend the James Bond universe and make some bold choices, the motivations for which become clear at the end.  And with this being the fiftieth anniversary of Dr. No, the film that started it all, what a better and appropriate time for this tabula rasa.