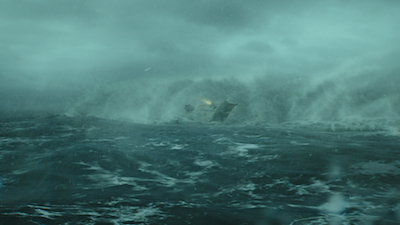 January 29, 2016 (San Diego) – Now that Hollywood has released all of its Oscar hopefuls, it’s time to sift through the leftovers. January is the month where you’ll be hard-pressed to find a decent movie. Even when you do, the chances are high that it’s not even worth a discounted ticket. It’s a truth that all film critics quickly learn.

The Finest Hours (Craig Gillespie, 2016) is bland and vanilla, made as if it was designed for a January dumping. Perhaps I’m being cynical, but this outlook may not be so unfounded when you see that Disney is the studio responsible for this movie. After all, Disney made, and continues to make, a box office killing with Star Wars: The Force Awakens (J.J. Abrams, 2015), and could certainly afford to write this one off.

The Finest Hours stars Chris Pine as United States Coastguardsman Bernie Webber. He’s not very bright, but that doesn’t stop Miriam (Holliday Grainger) from falling in love with him and proposing marriage. Just after they agree on a wedding date, his superior (Eric Bana) orders him to lead a small crew on a mission to rescue the crew of an oil tanker ripped in half and sinking fast. As Bernie and his crew brave the deadly blizzard and the ocean’s merciless waves, the tanker’s shy and less-than-confident first assistant engineer (Casey Affleck) takes over as acting captain and must convince his skeptical crew to work together to ground the tanker before it sinks.

For all of its faults, one thing must be praised and that’s the quality of the special effects. Far too often I’ll come across effects-driven movies where it’s apparent the technicians merely showed up for work to get a paycheck. Here, the responsible people apparently took much pride in their work, and it’s reflected in the excellent quality of the computer-generated imagery. You can see it in the deadly waves, which number in the dozens and mercilessly lap the tanker and rescue boat. So detailed are these waves that the brunt of their force as they routinely gulp the rescue boat is strongly felt, as is the tanker's carving.

It's too bad nobody else shared that dedication to his or her work. Not the writers, whose screenplay is an awful concoction of perfunctory dialogue and unbelievable situations. I knew the film was destined to fail early on in a scene where Bernie says no to Miriam’s marriage proposal. Hurt, she walks away. Realizing what he’s done, he follows her.

Now if I'm a woman and the man I work up the nerve to propose to says no, I'm not going to let him change his mind. I certainly wouldn't afford him that opportunity if his attempt to do so were as pathetic and meager as Bernie's.

But she does, and in a scene that left me shaking my head in disbelief, the two are engaged. This scene kills any opportunity for the film to succeed. It strands the film in a sea of unconvincing set pieces from which the movie makes no apparent attempt to escape. The rescue sequences should be breathtaking considering the scope of the effects’ quality, but the contrived and unbelievable story and character development cancels out any possibility of excitement.

Which brings me to another element that further sinks the film: the performances. I understand what Pine was going for, but his hapless shtick is met with laughable results. Or maybe laughable isn’t the right term, considering his acting reminded me of his colleague Affleck’s in The Killer Inside Me (Michael Winterbottom, 2010). In that film, Affleck played a small-town deputy sheriff who was quiet and meek on the outside, but hid a dark violent streak. He would be soft-spoken and amiable one minute, but within a split second would beat a woman so brutally she would die a slow miserable death from internal bleeding and asphyxiation. I think you can infer from that why Pine’s method doesn’t work. Plus, he is capable of playing far more effective leaders; see Star Trek (J.J. Abrams, 2009) and Unstoppable (Tony Scott, 2010).

Javier Aguirresarobe’s muddy photography adds to the frustration. The combination of harsh dark blue and brooding gray, torrential rain, and haphazard camera movement causes key scenes to be difficult to make out. Even sequences taking place on shore are dreary and bleak because the night scenes are gloomier than San Diego in June. The profoundly dark gray skies have the appearance of an apocalypse. I could shift some of the blame to the 3D – the only screening I could attend was in that format – but I’m not inclined to do so because the difference would be negligible. It’s that murky.

The Finest Hours may accurately describe the true events that inspired this movie. As its title, it is misleading. “The Flimsiest Hours” is more like it.

The Finest Hours is now playing in wide release.