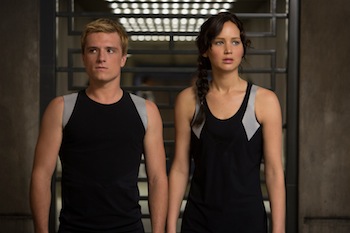 The Hunger Games (2012) ended with Katniss Everdeen (Jennifer Lawrence) and Peeta Mellark (Josh Hutcherson) emerging victorious.  Katniss – ever the anti-hero – isn’t enthusiastic about the upcoming victory tour.  She’s even less pleased when President Coriolanus Snow (Donald Sutherland) orders her to maintain the illusion that she and Peeta are lovers.  (The two attempted suicide, leaving the Capitol no choice but to declare two winners, instead of one.)  He reveals that her defiance of the rules has inspired rebellion among several districts, and unless she complies, he will order her family killed.

When it becomes clear that she won’t conform, the Head Gamemaker Plutarch Heavensbee (Philip Seymour Hoffman) sees an opportunity to quash a potential revolution by forcing her and Peeta to compete in the third Quarter Quell.  Held every 25 years, it’s a Hunger Games Tournament of Champions of sorts in which past winners must compete again.  Being the least experienced of the Tributes, the odds are certainly not in their favor.

That the competition is rigged to ensure Katniss’s demise parallels the 1950s quiz show scandals.  The two ostensible lovebirds are coached on how to act, speak, and smile.  Essentially, they’re forced to put on a performance so that they can look good on television.  They’re forced to be people they aren’t, which in the context of this film universe is degrading.  It’s degrading because Katniss and Peeta know from firsthand experience that millions of people in the outer districts are starving while the regime has the sympathy of the late North Korean dictator Kim Jong-Il (who, according to Parade Magazine, would travel by armored train eating lobsters with silver chopsticks while thousands of his constituents were literally dying of hunger).

The Capitol is a dystopian version of Pyongyang, where only the most wealthy and loyal North Koreans are allowed to live.  Skyscrapers line the streets, garish colors streak across, and the city is populated by sybarites who live a privileged life in more ways than one.  Given how tyrannical President Snow exerts his rule over the rebellious districts (many people are flogged, beaten, and shot to death execution style), living in the Capitol really is a privilege.  That’s why it’s difficult to feel the same degree of animosity towards this group of wealthy and elite as the haughty, hoggish one-percenters in Elysium.

I can’t decide which is the most deliciously cynical: the rigging, the coaching, or how much the populace laps up everything Hunger Games-related.  Effie (Elizabeth Banks) and Caesar Flickerman (Stanley Tucci) must be brainwashed if they actually believe what they think, say, and feel with all that unabashed enthusiasm they gush with.  The studio audience is naïve and gullible as they explode with zealous cheer and applause when each Tribute is interviewed, then turn rabid when Katniss and Peeta dare to challenge the establishment.

While the giddy populace sits like sheep watching this sham of a “pastime” unfold, the cynical Katniss sees through all the puffery.  Cynicism also happens to be Jennifer Lawrence’s trademark: see Winter’s Bone, where her character must rely on it to survive in the Ozarks and keep her family fed; Silver Linings Playbook, in which it’s one of the few things keeping her sane; and now Catching Fire, in which she must again use it to stay alive and not succumb to the corrupt political system.  However, she’s unwilling to take on the establishment.  She’s unhappy with the way things are, but she’d rather someone else do it, not her.  This trait adds much dimension to her character, giving it a welcome additional oomph.

Taking over for Gary Ross is Francis Lawrence (I Am Legend).  The Hunger Games contained numerous close-ups and a shaky camera, which bothered some people, but not me.  Lawrence and Director of Photography Jo Willems (replacing Tom Stern) approach the sequel slightly different.  While Catching Fire does contain its fair share of close-ups, many other shots go farther back to offset them.  A huge plus is the steadier camera.  In one scene, a fog rolls into the jungle.  Contact results in a nasty skin condition analogous to poison oak.  The allies run through the dark jungle, the steady camera giving a strong sense of the gravity of the situation, the wide shots illuminating the real danger of the encroaching poison fog leaving little room to run.

Catching Fire is hardly the first film in which director Lawrence buries social commentary into mass entertainment; I Am Legend was not one of 2007’s best films, but Will Smith was excellent, and the movie – terrible CGI monsters aside – was as well made as it was intelligently scripted.  Not surprisingly, Lawrence is the most logical choice for the Hunger Games series, and this one is a spot-on excoriation of totalitarianism and the worst of pop culture obsession, and thankfully he’ll be around for the two-part finale, Mockingjay.  I just wish I didn’t have to wait two more years for the conclusion.