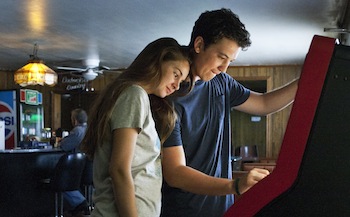 August 15, 2013 (San Diego) – Sutter (Miles Teller) is like that friend who has certain annoying tendencies, but you nonetheless love hanging out with.  He's a boisterous young man with an extreme fondness for beer...even though he hasn't yet graduated high school.  He knows how to have a good time, too.  A really good time.  One night he'll be at a party, and then the next morning he'll find himself passed out on a random neighbor's lawn.

That's where he meets Aimee (Shailene Woodley).  The two become good friends.  Sutter, however, still pines for his ex-girlfriend, Cassidy (Brie Larson), who is now dating Marcus (Dayo Okeniyi), a star athlete who is admittedly not as "cool" as Sutter.  Sutter vows not to get serious with Aimee, but he cannot deny his feelings for her.  Their relationship goes sour after he makes the mistake of trying to connect with his long-absent father (Kyle Chandler).  After having his heart broken, he fears he's turning into the same deadbeat man who left him and his mother (Jennifer Jason Leigh).

Lots of words come to mind in describing Aimee.  Pretty, sweet, innocent, shy, soft-spoken, and intelligent are the most apt.  These same words also describe a character not unlike her, Diane Court (Ione Skye) from my all-time favorite romance, Cameron Crowe's Say Anything.  In casting Aimee, director James Ponsoldt chose someone who similarly embodies the quiet, merely pretty girl who gets lost among the gorgeous ladies like Cassidy.  Aimee is not the most overly attractive girl in school.  Cute, yes, but certainly not the type of girl that guys would go out of their way to get.

It's a treat to watch her personality and sweetness gradually work on Sutter.  His character change is unusually subtle, so much so that it's barely noticeable; it took until almost the end for me to realize how he went from being obnoxious and irresponsible to sensitive and mature.  Ponsoldt goes out of his way to avoid telegraphing the character development.

Woodley's performance is subtly disarming and bewitching, inspiring the most positive change in a protagonist I’ve seen this year.  It culminates in one of the most tender love scenes I've seen, right up there with the love scene in Say Anything between Lloyd Dobler and Diane Court under the strains of Peter Gabriel's In Your Eyes.  Maturely written and acted, and directed, this scene made my heart melt like few have because of the strong, genuine love between the two.

Sutter, against his better judgment, meets his father, but it becomes clear he doesn’t want a part of his son’s life.  Likeability isn't an issue; he's nice and friendly, even when he leaves it up to his own underage son to pick up his tab.  His father even tells him he was and still is a terrible father, probably never meant to be one, and left because being one wasn't for him.  This hurts Sutter so much he nearly crashes the car.  On top of that, he orders Aimee out of the car, then promptly gets hit by a truck.  It’s shocking, but neither cruel nor unnecessary.

Ponsoldt's screenplay earnestly attempts to avoid formula, stressing character development over story development.  It throws the traditional "boy meets girl, boy gets girl, boy loses girl, boy tries to win girl back, boy wins girl back" story into the shredder and reconstructs it into a nifty, unique narrative.  Quite appropriate for a movie whose theme centers on living in the present.

Why doesn't Hollywood make more movies like this?  I don't mind formulaic movies if they're written and acted with respect for their characters and audiences.  Nor do I think all romantic dramas should never be formulaic.  But it would be nice if more filmmakers like Ponsoldt are given a chance to use not necessarily new or experimental storytelling methods, but different and invigorating ones.